While the second coming of Christ to this earth and the signs preceding this glorious event are the central theme of the Bible and the hope of all mankind through out the ages of earth’s history, the events which will take place after Christ’s coming are just as thrilling and even more wonderful in that they will unfold day after day, year after year, through eternity! Imagine! Time without end! It is difficult for man to comprehend such a thing, but God’s word is full of wonderful promises, and what God promises is sure!

In Lesson 7 we learned that the living righteous will be taken to heaven along with the resurrected righteous at Christ’s second coming. At this moment the 1,000-year period (millennium) will begin. Some people think the millennium will be a time of peace and prosperity here on earth. But remember that Satan in “walking about as a roaring lion” (1 Peter 5:8) in these last days, and his studied purpose is to mislead and deceive. Therefore it is important for us to be sure we are not deceived.

The Scriptures are clear concerning the millennium. During the 1,000 years, only the devil will be upon this earth, which is represented as a bottomless pit, for the wicked will all be dead and the righteous will be in heaven. Read Revelation 20 carefully, and you will discover the important sequence of events in the millennium.

The greatest earthquake ever witnessed will strike the earth at Christ’s coming. Revelation 16:17-20. Every mountain and island will be moved out of its place. Revelation 6:14-17. Hail weighing a talent (about 58 pounds) will fall, as the last of the seven plagues, God’s judgments on an unrepentant world. See Revelation 16:21.

Conditions during the 1,000 years 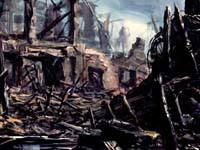 Due to the devastation left by the seven last plagues, particularly the great earthquake and the fire which destroys the wicked at Christ’s coming, this earth will be in a state of utter chaos, ruin, and darkness. Jeremiah 4:23-27 pictures the ugly scene – an empty, desolate earth, a giant ghost world!

Revelation 20:1-3 pictures Satan and his evil angels’ condition during this time: “And i s aw an angel come down from heaven, having the key of the bottomless pit and a great chain in his hand. And he laid hold on the dragon, that old serpent, which is the Devil and Satan, and bound him a thousand years. And case him into the bottomless pit, and shut him up, and set a seal upon him, that he should deceive the nations no more, till the thousand years should be fulfilled: and after that he must be loosed a little season.” Satan will be “bound” in the sense that he will be confined to the desolate earth and there will be no living person to deceive. For 1,000 years he can meditate on his long career of rebellion and its tragic results. He will also have time to plan his final assault on the city of God, about which we will learn later.

During the same period of time, the righteous will be in heaven engaged in a work of judgment. But why have a judgement when all the cases have already been decided? There are two reasons: First, the wicked will be resurrected at the end of the 1,000-year period to receive their punishment of the second death, so prior to this time their punishment must be decided. Second, God would not allow a single doubt to mar His plan for the salvation of all men. Therefore, during this time, the righteous will have access to the books of heaven in which are recorded both the good and bad thoughts, words, and deeds of all men. It will be made clear to them just how God worked to save everyone and how the wicked turned against Him. Thus when the wicked are punished, all will acknowledge God as just in destroying them. Revelation 20:4 portrays the judgement scene. The righteous will also judge the evil angels, as indicated in 1 Corinthians 6:1-3. Please read these texts carefully and note the sequence of events.

At the end of the millennium

1. The Holy City, New Jerusalem, the capital city of the new earth, will come down from heaven with Christ and then redeemed. Read Revelation 21:2.

2. The second resurrection takes place. Revelation 20:5, 13. After Christ calls them back to life the wicked face the judgment. See also John 5:28, 19.

3. Satan will be loosed for renewed activity and will go forth to deceive the nations once more. Revelation 20:7, 8. It is evident that he has not repented of his evil ways, for he gathers the wicked together for battle against Christ and the righteous ones one last time.

4. Satan will marshal the wicked to attack the Holy City. Revelation 20:9.

5. The wicked will then be arraigned before the bar of God at the great white throne. Revelation 20:11, 12.

6. The wicked and the devil will be destroyed in the lake of fire. Revelation 20:9, last part, 10, 14, 15. This is the second death. Please read 2 Peter 3:12 and Malachi 4:1, 3 as well. This fire will purify the earth and destroy the last traces of sin. Please remember that the wicked and Satan will burn up completely. They will be as ashes under the feet of the righteous. No eternally burning hell will dim the joy of the righteous who will not inherit the new earth which God will create.

7. A new earth will be created – an eternal home for the godly. Revelation 21:1; 2 Peter 3:13; Isaiah 65:17; 66:22. Read Revelation 21:1-8 and thrill to the reality of the perfect environment which God will re-establish! “And God shall wipe away all tears from their eyes; and there shall be no more death, neither sorrow, nor crying, neither shall there by any more pain: for the former things are passed away.” “He that overcometh shall inherit all things; and I will be his God, and he shall be My son.” Whether or not we are among God’s people in the Holy City on the new earth depends on whether we are overcomers now. Won’t you give Him your heart today?

Hell-eternal death for the wicked 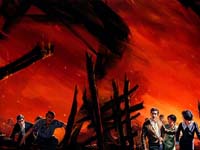 To grasp the destiny of the wicked, we need to understand the meaning of hell, a word inseparably connected with the topic of death and the judgment. These are subjects one doesn’t particularly relish thinking about, but it is necessary to understand their meaning as the Bible explains them.

In the original Biblical languages, more than one word was used, but in our Bibles they are all translated as “hell.”First, the Hebrew word Sheol and the Greek word Hades mean “grave”. Psalm 16:10; Revelation 20:13, 14. Secondly, the Greek word Tartarus means “darkness”. 2 Peter 2:4. The third meaning, “a place of burning” (Gehenna in the Greek), is the one to be discussed here.

On the day of judgment, the earth will become a lake of fire (hell) which will destroy the wicked and the present world. 2 Peter 3:7, 10. This destruction by fire is called the second death. Romans 6:23. The soul who sins will die the second death. Ezekiel 18:4.

The term “everlasting fire” is sometimes used in the Bible to describe the punishment of the wicked. It is important to remember that this fire will completely destroy the wicked. It is an eternal punishment, not punishing. The difference is important! They will not burn unendingly. The Bible says that Sodom and Gomorrah were burned with eternal fire, but no one can say they are still burning today. Jude 7; 2 Peter 2:6. (It is interesting to note that radiation was found in the soil at the site of the ancient cities by Russian scientists.) Likewise the palaces and temple of Jerusalem were devoured by unquenchable fire in B.C. 606. See Jeremiah 17:27. Jerusalem burned until there was nothing left, but it finally did cease to burn.

All men go into the grave (also referred to as “hell”) at death, whether they are good or bad; but no punishment or reward is given at that time. All the dead sleep in the dust at least until Christ’s second coming. Then only the righteous dead are called forth to eternal life. But the wicked dead sleep on for the 1,000 years. At the end of the millennium, the wicked are resurrected to receive their punishment – eternal destruction. They will burn until there is nothing left; they will be completely destroyed.

Never think for one moment that a loving, merciful God will make a man burn forever for the sins he committed in one short lifetime! The Lord has no pleasure in the death of the wicked, but He will do this work which must be done. “Have I any pleasure at all that the wicked should die? saith the Lord God: and not that he should return from his ways, and live?” Ezekiel 18:23, 32; 33:11. A wonderful consolation to all who love the Lord is given in Nahum 1:9. Sin will never rise again!

The new earth – eternal life for the redeemed

The earth, purified by the fire which destroys the wicked at the end of the millennium, will be re-created by God. Then man – the redeemed, having fully overcome all sin – will again enjoy the beauty and perfection of Paradise. Picture the lovely scene, as portrayed in Revelation 21 and 22 – the Holy City with its walls of jasper and streets of gold, its 12 foundations of precious stones, with the glory of God and of the Lamb as its light’ the absence of pain, sorrow, sickness, crying and death. Revelation 21:1-4; Isaiah 33:24. Add to this the description found in Isaiah 35.

There will be country life and planting on the new earth. Isaiah 65:17, 21. Isaiah 11:6-9 tells how peaceful the animals will be. Imagine the leopard lying down with the kid or the bear feeding with the cow! And most amazing of all, “a little child shall lead them”!

The glorious things which God has prepared for those who love Him and keep His commandments are too wonderful for us to fathom. But by faith we can picture and prepare for that wonderful new heaven and earth where we shall spent eternity with out Lord and Saviour! “But as it is written, Eye hath not seen, nor ear heard, neither have entered into the heart of man, the things which God hath prepared for them that love Him.” 1 Corinthians 2:9.