A gigantic struggle between the opposing forces of evil and righteous-ness is portrayed in the entire chapter of Revelation 12. It is shown in prophetic symbols, as is the case throughout the whole book of Revelation. We must understand the meaning of each symbol in order to comprehend this narrative. Please read the chapter now, and then we will examine each of the following symbols: The woman, the dragon, the sun, the stars of heaven, the ten horns, the flood, the earth and the remnant of the woman’s seed- as well as the meaning of the prophecy itself. 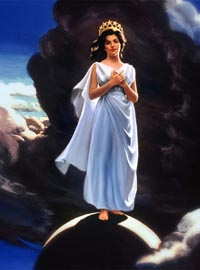 First of all, a woman in prophecy denotes a church. See 2 Corinthians 11:2; Hosea 2:19; Isaiah 62:5; Jeremiah 6:2. This woman in Revelation 12:1 is portrayed as a pure woman, so she represents a pure church. She is “clothed with the sun,” depicting the full light of the gospel dispensation. Under her feet- something in the past- is the moon, which represents the Mosaic dispensation with all its types and shadows pointing forward to their fulfillment in Christ. Just as the moon reflects the light of the sun, so the dispensation of types and shadows was only a reflection of the real, the gospel dispensation. The crown of twelve stars symbolizes the twelve apostles who were commissioned by Jesus to carry the gospel to the ends of the earth.

According to Revelation 12:2, 5, the woman brought forth a man child. This can refer to only one Person in history. “I will declare the decree: the Lord hath said unto Me, Thou art My Son; this day have I begotten Thee. Ask of Me, and I shall give Thee the heathen for Thine inheritance, and the uttermost parts of the earth for Thy possession. Thou shalt break them with a rod of iron; thou shalt dash them in pieces like a potter’s vessel.” “Kiss the Son, lest He be angry, and we perish from the way, when His wrath is kindled but a little. Blessed are all they that put their trust in Him.” Psalm 2:7-9, 12. Only the Son of God matches this description. Note also that “her child was caught up unto God, and to His throne.” See Hebrews 8:1.

Who is the great red dragon referred to in various places in this chapter? It is the fallen angel, Satan, who rebelled against God. In his attempts to destroy God’s true church, he has always used human agents; thus the dragon in Verses 3, 4, further depicts that power through which he worked- Rome. It is described as having seven heads, representing Rome’s seven forms of government: (1) kingly, (2) consular, (3) decemvirate, (4) dictatorial, (5) triumvirate, (6) imperial, (7) papal. The agent of Rome, Herod, was the one who attempted to kill Jesus as soon as He was born. See Matthew 2:7, 8, 12-18. The ten horns are the same horns, or the divisions of the Roman Empire, already studied in Lesson 9.

Verse 4’s statement that the dragon’s tail cast a third of the stars to the earth refers to two things: (1) the number of heavenly angels who sided with Satan in rebellion, and (2) the fact that Rome abolished one of the three classes of Jewish rulers- the kings. Only the priests and the Sanhedrin were allowed to rule in Israel when the Romans took over.

Although Satan’s battle against God, and especially Christ as He came down to the earth Satan had stolen from Adam, is portrayed throughout Revelation 12 as he works through various agents, there are two places which refer directly to Satan and show his defeat. The first tells of the battle in heaven when Christ and His angels defeated Satan and the angels who took his side. Verses 7-9. This battle occurred before Adam’s fall into sin. In spite of this, Satan was not yet totally defeated.

Verse 10 refers to Christ’s victory over the devil when He died on the cross. Before Christ’s death at the hands of Satan (who carried out his work through the Jewish and Roman rulers), the unfallen universe still had a measure of sympathy for this former co-worker. But when the unfallen angels and inhabitants of other worlds saw Satan’s unbelievable cruelty toward a totally innocent Being—God’s own Son, from birth to His crucifixion—all doubt about his completely evil nature was removed. “…The accuser of our brethren is cast down,..” His eternal destruction was fixed. 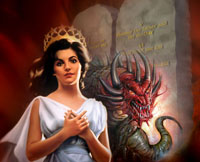 Aware of his defeat and coming annihilation, Satan turned his fury against the church of God. The only way he could now fight against God was by making war on Christ’s followers. “Therefore rejoice, ye heavens, and ye that dwell in them. Woe to the inhabiters of the earth and of the sea! For the devil is come down unto you, having great wrath, because he knoweth that he hath but a short time. And when the dragon saw that he was cast unto the earth, he persecuted the woman which brought forth the man child.” Verses 12, 13. Therefore, after Christ returned to heaven in A.D. 31, the true people of God felt the full force of Satan’s wrath. Stephen was stoned by a Jewish mob. Then Rome took up the persecution. The apostle Andrew was crucified by order of Governor Egeas. James was killed by the sword at the order of Herod. See Acts 12:1, 2. Peter was crucified, while the apostle Paul was beheaded. Cast into a cauldron of boiling oil from which he was miraculously delivered, John was later banished to the Isle of Patmos.

Then we recall the atrocities of the despot Nero, who relentlessly destroyed the Christians. One of the great sports in that dreadful day was viewing the Christians being devoured by wild beasts. Yet the more Christians were killed, the more their numbers increased. Said an early Christian to the persecutors, “…Kill us, torture us, condemn us…Your injustice is the proof that we are innocent…Nor does your cruelty…avail you. The oftener we are mown down by you, the more in number we grow; the blood of Christians is seed.” – Tertullian, Apology, paragraph 50 (quoted in Ellen G. White, The Great Controversy, pp. 41, 42).

When pagan persecution did not effectively destroy God’s people, the dragon resorted to bringing a false religious belief and organization into the church. This was accomplished through what we know today as the papacy, the little horn of Daniel 7:8, 21, 24, 25; 8:23-25. This was more dangerous to the church than persecution itself; papal Rome then persecuted worse than did the pagans.

The woman- the true church- was not left alone in her struggle against the power of the dragon. Revelation 12:14-16. “Persecution opened upon the faithful with greater fury than before, and the world became a vast battlefield.” –The Great Controversy, pp. 54, 55. God’s people fled from the cities into the hidden parts of this earth. Think, for example, of the faithful Waldenses. “Behind the lofty bulwarks of the mountains- in all ages the refuge of the persecuted and oppressed- the Waldenses found a hiding place. Here the light of truth was kept burning amid the darkness of the Middle Ages. Here, for a thousand years, witnesses for the truth maintained the ancient faith.” – The Great Controversy, pp. 65, 66. The faithful Albigenses, who were gain and again attacked and persecuted, were so thankful when they could flee from the relentless persecution of the major areas of population to the remote hiding places of the mountains.

So it was fulfilled that the woman fled into the wilderness during the time of papal supremacy from 538 to 1798. (For verification of these dates, see Lesson 9, regarding this same time period in Daniel 7.) Often during this time the papacy raised up great armies to destroy the faithful Christians, even in their mountain fastnesses. This flood of water is the Biblical symbol for great numbers of people. “And he saith unto me, The waters which thou sawest, where the whore sitteth, are peoples, and multitudes, and nations, and tongues.” Revelation 17:15.

Humanly speaking, the true people of God were destined to be wiped from the face of the earth, but God was mindful of the needs of His children. “The earth” – those areas with sparse population- “helped the woman,…and swallowed up the flood which the dragon cast out of his mouth.” Revelation 12:16.

With the possibility of passage to the New World, God’s people could flee the persecution of the Old World. Here many found freedom of worship hitherto unknown. Yet even today the dragon is not satisfied to allow God’s people to dwell in peace. Even though his persecuting power was greatly diminished by the 16th century Protestant Reformation and by the religious liberty given to people in some parts of the world, Stan is still out to destroy God’s people. “And the dragon was wroth with the woman, and went to make war with the remnant of her seed, which keep the commandments of God, and have the testimony of Jesus Christ.” Revelation 12:17.

The woman, as we have already seen, depicts God’s faithful people – or in simple terms, the Reformed churches – who stood up against the power of Rome.

The special message of the first angel of Revelation 14, studied in Lesson 12, brought into being a new organization, the Advent Movement, later called the Seventh-day Adventist Church. Yet it is not the woman which is the target of Satan’s wrath, nor even the woman’s seed, the Adventists. It is the remnant of this movement. Why? Because they (1) “keep the commandments of God”- not just teach, but keep; and (2) “have the testimony of Jesus Christ.” What is this testimony? “…For the testimony of Jesus is the spirit of prophecy.” Revelation 19:10. We will study about the latter characteristic in the next lesson.

God has such a remnant people today. It is a great privilege to be part of it; but one must be willing to endure persecution. As we will learn in Lesson 15, it also means a decision to separate from the things of this world. But it’s worth it all, for we will share in the rewards of the redeemed!