Lesson 11 – The Sanctuary and Its Significance

In ancient Israel, when they were still a theocracy, daily life centered around the sanctuary. It was their holy place – their church. In this sanctuary every day, animals were sacrificed in the morning and in the evening for the people collectively. In addition, all during the day, individuals brought certain sacrifices for specific sins which they had committed, as well as special offerings for special occasions.

The sanctuary was composed of basically three sections. The outer court measured approximately 75 feet by 150 feet and was enclosed with pillars upon which was hung a screen resembling a curtain. The height of these “walls” was about 7 1/2 feet. The court had a gate on the east side for entrance. Within this court stood the sanctuary itself. This structure was composed of walls made of boards of wood overlaid with gold; hangings served as the roof. This building was approximately 45 feet long and 15 feet wide and high. It was divided into two compartments, designated the Holy Place and the Most Holy Place.

1. Altar of burnt offerings
2. Brass laver – a basin in which the priests washed.

6. Ark of covenant, which contained the law of God, Aaron’s rod, and the pot of manna. The mercy seat, a lid of solid gold on which stood two golden cherubims, covered the ark of the covenant. The holy shekinah, God’s presence, appeared between the two cherubims. Thus the mercy seat showed that God’s mercy stands between God and His law.

Each object, as well as the entrance to the court, represented a definite part of God’s plan of salvation, not only for the Jews, but for all who will come to Him for help.

The Lord Himself commanded Moses to build the sanctuary. Exodus 25:1-8. It was to demonstrate how God deals with sin and the sinner. When Moses was commanded to build the ark of the covenant, he was to follow a special design which the Lord showed him. Exodus 25:8, 9.

The entire service of the tabernacle might seem strange and foreign to us if it were not clearly explained in the New Testament book of Hebrews. Please read Hebrews 8 and 9 carefully. The earthly sanctuary portrayed the work which Christ is doing for us in the true sanctuary in heaven, of which the earthly structure was only a model. “Who serve unto the example and shadow of heavenly things, as Moses was admonished of God when he was about to make the tabernacle: for, See, saith He, that thou make all things according to the pattern shewed to thee in the mount.” Hebrew 8:5.

Two of the same objects found in the earthly sanctuary – the seven lamps and the altar of incense – were seen by John the Revelator in the temple in heaven. Revelation 4:5; 8:2-4. In Revelation 11:19, the ark of His testament was seen. 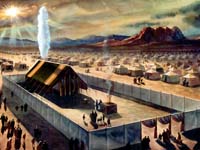 In the earthly sanctuary, the priests brought sacrifices each day. Once each year, however, the high priest officiated alone in the Most Holy Place. “But into the second went the high priest alone once every year, not without blood, which he offered for himself, and for the errors of the people.” Hebrews 9:7. This was the Day of Atonement, or reconciliation; it pointed forward to the time of the investigative judgement when the final reconciliation work would be finished by Christ. The word “atonement” originally meant “to reconcile, to purge away,” or the state of being in agreement. The English word, when broken into parts, is “at-one-ment,” showing how God brings sinful man back into harmony with Himself.

In the heavenly sanctuary, the High Priest is Jesus Christ. “Now of the things which we have spoken this is the sum: We have such an high priest, who is set on the right hand of the throne of the Majesty in the heavens; A minister of the sanctuary, and of the true tabernacle, which the Lord pitched, and not man.” Hebrews 8:1, 2.

Each day in the earthly sanctuary, as the people brought their sin offerings, their sins were symbolically transferred to the sanctuary, which then had to be cleansed on the Day of Atonement. See Leviticus 16:15-19, 30; 23:27,29. This annual Day of Atonement (the judgment day) was God’s last call to repentance.

The types and symbols of the earthly sanctuary pointed to Jesus Christ’s death on the cross. At Christ’s baptism the words of inspiration spoken by the prophet John the Baptist explained Jesus’ mission on earth: “The next day John seeth Jesus coming unto him, and saith, Behold the Lamb of God, which taketh away the sin of the world.” John 1:29. When the true Lamb of God was slain, the earthly ritual ended, for now the real Sacrifice for man had been offered. “Jesus, when He had cried again with a loud voice, yielded up the ghost. And, behold, the veil of the temple was rent in twain from the top to the bottom; and the earth did quake, and the rocks rent.” Matthew 27:50, 51. The supernatural rending of the veil was Heaven’s declaration that the earthly sanctuary had lost its sanctity. From that point onward, the work for man’s salvation centered in the heavenly sanctuary. “But Christ being come an high priest of good things to come, by a greater and more perfect tabernacle, not made with hands, that is to say, not of this building.” Hebrews 9:11.

Christ at His ascension began His work as our great High Priest in the first compartment of the sanctuary in heaven. See Hebrews 9:24.

According to the prophecy given to Daniel, there was to be a cleansing, or Day of Atonement, in the heavenly sanctuary. “And he said unto me, Unto two thousand and three hundred days; then shall the sanctuary be cleansed.” Daniel 8:14. The 2,300 days (years) ended in 1844. At that time the judgment began for all the people of this earth. See Revelation 22:11-20.

The work of investigating every individual’s case, from Adam to the end of the world, and blotting out all sins from the heavenly sanctuary must be accomplished before the second advent of Christ. When Christ ascended to heaven after His crucifixion, He entered the Holy Place. There He worked for over eighteen centuries, mediating for sinners who asked His forgiveness. 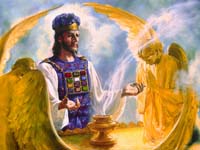 But in 1844, He entered the Most Holy Place for the special work of atonement. Any person who has unrepented sins in the books of heavenly record (Daniel 7:10; Revelation 20:12) will be accounted with the wicked. Exodus 32:33. The record in heaven is unerring; sin that has been concealed, denied, or covered up will there be brought to light. Every provision for man’s confession and forgiveness has been made by Heaven, so there is no excuse for any who refuse God’s mercy. Ezekiel 18:24; Isaiah 43:25; Revelation 3:5.

In the typical day of Atonement, every person who did not afflict his soul, confess all sin, and make solemn preparation was cut off from among his people. Leviticus 23:39. So in the actual Day of Atonement going on now, each individual who is to be saved must confess and forsake all sin and carelessness which separate him from God.

In the next lesson we will look at another prophecy which gives God’s last call to mercy as well as His tests of obedience for people today.