We have already established the fact that Jesus Christ, in cooperation with His Father and the Holy Spirit, created all things. “In the beginning God created the heaven and the earth.” Genesis 1:1. See also Colossians 1:12-17. With these simple words the Bible explains the origin of the universe and the material world. In fact, the holy pages contain the only authentic record of creation. Here is found the true history of the origin of the human race, a record unmarred by human bias or prejudice. 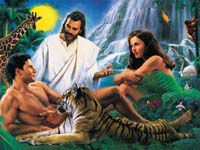 “There is a constant effort made to explain the work of creation as the result of natural causes; and human reasoning is accepted even by professed Christians, in opposition to plain Scripture facts… Just how God accomplished the work of creation He has never revealed to men; human science cannot search out the secrets of the Most High. His creative power is as incomprehensible as His existence.” – Ellen G. White, Patriarchs and Prophets, p. 113.

The idea that God needed matter to create the world has no basis in the Scriptures. God was not dependent upon the pre-existence of matter at the time He created the world. All things, material and spiritual, came into being by “the spirit of His mouth.”

“By the word of the Lord were the heavens made; and all the host of them by the breath of His mouth…” Psalm 33:6-9.

“Through faith we understand that the worlds were framed by the word of God,…” Hebrews 11:3.

The popular theory of evolution teaches that man developed from lower forms of life, such as mollusks and four-footed creatures, or even that he is the product of development of certain germs or cells. In this way the evolution of the human race is said to cover a period of millions of years. Yet the Scriptures teach plainly that the earth was created in six literal 24-hour days, each consisting of a dark and a light period as we know them today. Read the Genesis account of creation (Genesis 1 and 2), and you will see the simplicity and clearness of this miraculous event. Everything we need to know is told us; all we do not need to know God knows, and that knowledge belongs to God and is His prerogative to reveal or keep secret, according to His own infinite wisdom. Science reveals the amazing order and complexity in all life forms and is at a loss to satisfactorily explain how they came into being except by the hand of an all-wise Creator. Notice even in Exodus 20:8-11, in the fourth commandment, how precisely God spells out that “in six days the Lord made heaven and earth, the sea, and all that in them is, and rested the seventh day:…” And the last book of the Bible calls on men to “worship Him that made heaven, and earth, and the sea, and the fountains of waters.” Revelation 14:7.

The Bible opposes the theory of evolution by stating that man was created in God’s image. God made no mystery of this fact. There is no evidence for anyone to suppose that man or any other kind of life was evolved by slow degrees of development from lower forms of vegetable or animal life. Man loses his rich heritage and lowers his conception of himself to the level of his own narrow earthly thoughts by accepting such erroneous teachings as evolution. There is overwhelming evidence of the Creator’s master mind all around us – beauty in nature, the human mind, the miracle of birth, the environment, and far more. Please read the following verses carefully: Genesis 1:26, 27; Psalm 139:14; Ephesians 2:10.

To Adam, created in the image of God, pure in body and mind, perfect and sinless, was given a life companion – Eve. The first pair was placed in a lovely garden and given dominion, or rulership, over the whole earth. What more could man desire than that his perfect world would continue forever?

Man’s happiness and welfare were dependent on obedience to all the laws of God – moral and physical. These laws were made to regulate and control all God had created and were for the benefit of all the creation. An all-wise God foresaw that disaster would result if the universe were lawless and in love and mercy made laws which were just, reasonable, and good.

Read Genesis 1:1-29, and you will discover ten fundamental physical laws set into being by God, including the law of light and the law of the atmosphere. In addition to these laws, man, as the crown of creation, was given four special laws to insure his happiness.

Looking at these four natural laws a little more closely, we can readily understand how God was interested in every aspect of man’s being. In the plant life He provided nourishing food for both man’s and the creatures’ physical health. Much disease today is a result of violating this law.

“To the dwellers in Eden was committed the care of the garden, ‘to dress it and to keep it.’ Their occupation was not wearisome, but pleasant and invigorating. God appointed labor as a blessing to man, to occupy his mind, to strengthen his body, and to develop his faculties.” – Patriarchs and Prophets, p. 50. 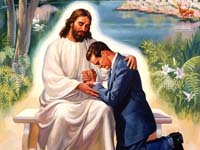 Man was to labor six days; and on the seventh day, he was to follow God’s own example in resting. The Sabbath was not merely for physical rest, for neither God’s nor man’s work was tiring to them. Rather, the rest day was to be a special, holy time for worship and spiritual refreshing. God saw that a Sabbath was essential for man even in Paradise. He needed to lay aside his own interests and pursuits for one day of the seven so he could contemplate the works of God more fully and meditate upon His power and goodness.

“So God created man in His own image, in the image of God created He him; male and female created He them. And God blessed them, and God said unto them, Be fruitful, and multiply, and replenish the earth,…” Genesis 1:27, 28. “Marriage is honourable…” Hebrews 13:4. Notice that God Himself instituted marriage – one man and one woman, the cornerstone of the family and human society.

“…It was one of the first gifts of God to man, and it is one of the two institutions that, after the fall, Adam brought with him beyond the gates of Paradise. When the divine principles are recognized and obeyed in this relation, marriage is a blessing; it guards the purity and happiness of the race, it provides for man’s social needs, it elevates the physical, the intellectual, and the moral nature.” – Patriarchs and Prophets, p. 46.

Thus we see from God’s word that the origin of all things is God Himself. We need never be fooled or confused by the theories of man. The Bible has all the knowledge on these vital issues of life which we need to know. We may understand from the pages of sacred writings that God is, indeed, a God of love. He made man perfect and provided everything for his needs and happiness that man could ever desire. It was the Creator’s purpose that he should continue in this Paradise on earth forever. It was not God’s plan that man should become familiar with evil, but we will learn in the next lesson more of the depth of God’s love and how He provided a plan whereby man could be redeemed should he ever fall into sin.

THE EXTRAVAGANCE OF GOD