Section C: God’s Truth and You

God has given us many beautiful, abundant promises. With all these promises He treats us as we often treat our children – we make an agreement with them, such as, “If you are good, you will receive a special treat!” Similarly, God’s promises are given to man on the condition of his obedience. “And hereby we do know that we know Him, if we keep His commandments. He that saith, I know Him, and keepeth not His commandments, is a liar, and the truth is not in him.” 1 John 2:3,4. If the Jewish people had remained faithful to God, they would have remained God’s chosen nation. They had promised at Mount Sinai, “All that the Lord hath said will we do, and be obedient.” Exodus 24:7. When they did not keep their part of the agreement, God could not fulfill His promises to them. 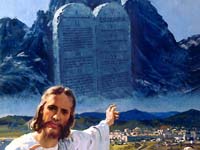 Many consider God’s commandments “yokes of bondage,” but the apostle James describes them as the law of liberty. See James 1:25. The apostle John stated that God’s “commandments are not grievous.” 1 John 5:3. In this lesson we will learn about the blessings promised to man when he is obedient to God’s law, which gives liberty from the dread curse of sin with all its accompanying sorrow, disease, and woe.

On Mount Sinai, God spoke the moral law with His own voice. The first part of it is as follows:

1. “I am the Lord thy God, which have brought thee out of the land of Egypt, out of the house of bondage. Thou shalt have no other gods before Me.”

3. “Thou shalt not take the name of the Lord thy God in vain; for the Lord will not hold him guiltless that taketh His name in vain.”

4. “Remember the Sabbath day to keep it holy. Six days shalt thou labour, and do all thy work: But the seventh day is the sabbath of the Lord thy God: in it thou shalt not do any work, thou, nor thy son, nor thy daughter, thy manservant, nor thy maidservant, nor thy cattle, nor thy stranger that is within thy gates: For in six days the Lord made heaven and earth, the sea, and all that in them is, and rested the seventh day: wherefore the Lord blessed the Sabbath day, and hallowed it.” Exodus 20:2-11.

The first commandment strikes at all false gods. By making our Creator first and foremost in our emotions, all else fades into insignificance by comparison. Who could think of worshipping any god made of wood or stone, when he has the privilege of worshipping the One who loves man so much, not only because He created him but because He also redeemed him. Just as a husband or wife promises to devote his entire affections to his life partner, so the Christian promises to love God supremely. In turn, God promises to be a loving Father to him; even more, He promises him the privilege of being a joint heir with Christ. He is adopted into God’s family. “For as many as are led by the Spirit of God, they are the sons of God. For ye have not received the spirit of bondage again to fear; but ye have received the Spirit of adoption, whereby we cry, Abba, Father. The Spirit Itself beareth witness with our spirit, that we are the children of God: And if children, then heirs; heirs of God, and joint heirs with Christ; if so be that we suffer with Him, that we may be also glorified together.” Romans 8:14-17

God knew that man would be tempted to lose sight of the living God, whom he could not visibly see, and be attracted to tangible objects. It is for this reason that He commanded men not to make or worship images. We don’t have to travel to foreign lands to see images which men worship. Even in the “civilized” cultures false gods and images are worshipped. Such images take on many forms. The first and second commandments are very closely related; both forbid the worship of anyone or anything other than the true God. When a person sets his mind on gaining the riches of this earth, exerting all his abilities and energies in that direction, this object becomes his god. Whatever a man is unwilling to give up for God becomes an idol. Thus anything which is given more thought or devotion than God becomes a false god.

The Psalmist described what the worship of images leads man to be like. “Their idols are silver and gold, they speak not: eyes have they, but they see not; They have ears, but they hear not: noses have they, but they smell not: they have hands, but they handle not: feet have they, but they walk not: neither speak they through their throat. They that make them are like unto them; so is every one that trusteth in them.” Psalm 115:4-8. A person will never rise higher than his ideal; if his ideal is only a statue or other object, he will never be changed into the likeness of God. God can adopt us as His children only when we accept Him as our Father.

When God says we are not to take His name in vain, this prohibition encompasses much. In addition to forbidding the use of God’s name in cursing and swearing, this commandment is also a safeguard to the integrity of God’s family of believers. How would you feel if a renowned criminal carried the same name as yours and even claimed to be a member of your family, when he really was not? Would you not do everything possible to dissociate yourself from such an individual? So it is that God wants us either to be like Him or not to bear His name at all. Nothing has caused greater disrepute to be heaped upon the cause of Christianity than for those who carry the name of Christ to commit vicious deeds and live immoral lives – all under the guise of Christianity. 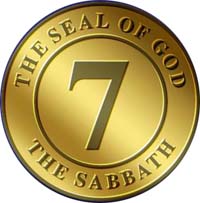 The fourth commandment gives us a positive way to show the entire world that we honour God and accept Him as Creator and Lord. Every seventh day, man is called to remember his Creator. Man, by nature, has a short memory. This is why God sent apart a special day for man to remember Him. In addition to this, God realized that we need a day each week not just for physical rest but for spiritual refreshing.

God Himself gave man an example in Sabbath observance. He rested and calls upon man to do likewise. Since that first seventh day, this 24 hours of time each week were not to be considered on the same level as the other days of the week, because the Lord sanctified that day. To sanctify means to “set apart for a holy purpose.” By observing that day, we acknowledge the authority of God as well as His creatorship.

Jesus taught the true purpose of the Sabbath. “And He said unto them, The sabbath was made for man, and not man for the sabbath.” Mark 2:27. It was made to be a blessing to mankind. In the command to keep the seventh day for holy time is embodied a promise. “If thou turn away thy foot from the sabbath, from doing thy pleasure on My holy day; and call the sabbath a delight, the holy of the Lord, honourable; and shalt honour Him, not doing thine own ways, nor finding thine own pleasure, nor speaking thine own words: Then shalt thou delight thyself in the Lord; and I will cause thee to ride upon the high places of the earth, and feed thee with the heritage of Jacob thy father: for the mouth of the Lord hath spoken it.” Isaiah 58:13, 14.

And through the prophet Isaiah we are also promised that even in the new earth, which God will create for His redeemed ones, the Sabbath will still be observed. “For as the new heavens and the new earth, which I will make, shall remain before Me, saith the Lord, so shall your seed and your name remain. And it shall come to pass that from one new moon to another, and from one sabbath to another, shall all flesh come to worship before Me, saith the Lord.” Isaiah 66:22, 23.

Observing these first four of the Ten Commandments, we not only honour our Creator but also enrich our own lives through being in harmony with the great God.