Lesson 2 made reference to sin and Jesus’ work to restore man to his original relationship with God. We learned that Jesus died on the cross to make it possible for men to be forgiven their sins and to inherit eternal life. Now we shall discover the origin of sin, which is the transgression of God’s law. See 1 John 3:4.

At one time or another, virtually everyone asks, “How is it possible that a loving, all-wise, powerful God could permit sin to enter this world and cause sickness, suffering, and death?” “Why does He allow this world to go on in its wretched condition?”

One thing is crystal clear: The cause of the existence of sin is not found in God! There is no valid reason for sin to exist. It is a mysterious intruder; to defend it is to excuse it and divest it of all sinfulness. See Genesis 1:31; 1 John 4:8; Romans 11:33; Psalm 62:11.

It may come as a surprise to many that sin originated in heaven – with Satan, who was once called Lucifer. 1 John 3:8. Lucifer (the name means Lightbearer) was the only being, other than Christ, who was so highly honored by God and the angels. He was created perfect, being called the “son of the morning” (Isaiah 14:12) and the covering cherub – one of God’s throne watchers. Ezekiel 28:14.

Under the symbol of the King of Tyrus, the Bible reveals Lucifer’s original state. He was full of wisdom and perfect in beauty. See Ezekiel 28:12-15. God created a perfect world and a perfect Lucifer. Yet, for reasons unexplainable to man, this highest created being became proud of his abilities and beauty and was overpowered by the passion of self-exaltation. He purposed in his heart to elevate himself above God. Notice in Isaiah 14:13, 14 that the word “I” occurs five times. Unreasonable self-exaltation, ingratitude, pride, lack of love, and dissatisfaction in the heart of Lucifer were the source of his sin.

Satan was cast out of heaven 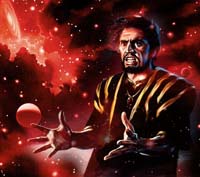 God did not prevent Lucifer’s revealing what was in his heart, nor did He immediately destroy Lucifer when his rebellion became obvious. If God had done this, all the other angels and created beings would undoubtedly have remained loyal to Him because of fear. But God wants loving and intelligent, not fearful, service from all His created family. “Perfect love casteth out fear.” 1 John 4:18.

When Satan’s rebellion became evident, all of the angels had to make their choice for or against God. Unfortunately, many chose to join the rebellion; thus there was war in heaven between Christ and His loyal angels and Satan and his rebellious angels. See Revelation 12:7-9, 4. Satan and his followers were cast out of heaven. Luke 10:18.

Revelation 12:12 says, “Woe to the inhabiters of the ear…! For the devil is come down unto you, having great wrath, because he knoweth that he hath but a short time.”

Satan is the inventor of all forms of idolatry, through which he darkens men’s thoughts and draws them away from the worship of the true God. His principal work is to deceive man and turn him against God’s commandments, because he knows very well that obedience to God’s commandments is the source of man’s happiness and eternal life.

Here are Satan’s methods of working for man’s destruction:

Deception
Genesis 3:1; 1Timothy 2:14 – He spoke through the serpent and deceived Eve.
2 Corinthians 11:13-15 – He transforms himself into an angel of light and his deceitful ministers into apostles of Christ.
Ephesians 6:12 – He works through religious and governmental powers.
Revelation 16:14 – He deceives by miracles.

Persecution
Revelation 12:17 – He hates Christ and persecutes His true church – God’s commandment keepers.
1 Peter 5:8 – Like a roaring lion, he seeks to destroy every true Christian.

We can overcome Satan

From Adam’s time to today our great enemy, the devil, or Satan, has used his power to tempt man to sin – to break God’s commandments – and to destroy God’s creation. All who seek to follow Jesus will encounter this merciless foe. But Christ has promised the victory to those who accept His sacrifice and call on Him for help. He came to this world to destroy the works of the devil. 1 John 3:8. Satan can never force the soul to sin; he must gain our consent first.

The grace of Christ in the heart of the believer creates enmity against Satan. Without this converting grace and renewing power, man would stay Satan’s captive. Satan promises freedom, but in reality he makes man a slave. Romans 6:16. Jesus says, “Take My yoke upon you and learn of Me;” and He makes man truly free.” Matthew 11:29, 30; James 1:25.

To overcome Satan, we must put on the whole armor of God. Study Ephesians 6:10-18 carefully, and you will find out what this armor consists of. We can overcome the devil by the blood of the Lamb and by the word of our testimony. Revelation 12:11. We can resist Satan through God’s help and by relying on the Bible’s truth. James 4:7; Matthew 4:4, 7, 10, 11. Evil can be overcome by good. Romans 12:21. God promises Satan’s complete overthrow and destruction in Revelation 20:10: “And the devil that deceived them was cast into the lake of fire and brimstone,…”

“There is a mighty power in prayer. Our great adversary is constantly seeking to keep the troubled soul away from God. An appeal to Heaven by the humblest saint is more to be dreaded by Satan than the decrees of cabinets or the mandates of kings.” – Ellen G. White, Sons and Daughters of God, p. 136.

We have already seen that a large number of angels sided with Lucifer in his rebellion against God. These fallen angels, now called evil angels, or evil spirits, assist Satan in his work of deception, persecution, and destruction. Particularly through spiritualism they communicate with humans, pretending to be dead loved ones or friends, and thus carry on Satan’s relentless work of deception in his age-long controversy with Christ. In Deuteronomy 18:9-12, God strongly denounces spiritualism, for He knows its end.

However, we can be so thankful that there are good angels, who are loyal to God and a blessing to us. They are called “ministering spirits” who assist and protect man and have an active role in the plan of salvation. Actually, what are angels? Psalm 8:4, 5 tells us that angels are created beings made higher than man. Genesis 32:1, 2 and 1 Kings 22:19 call the angels God’s host, or army. “Are they not all ministering spirits, sent forth to minister for them who shall be heirs of salvation?” Hebrews 1:14.

Genesis 3:24 shows that angels (here called cherubims) are actual beings. They guarded the entrance of the Garden of Eden after Adam and Eve were sent out of it. Genesis 18 tells the story of three travelers who talked and ate with Abraham on their way to Sodom and Gomorrah. In Chapter 19, it is revealed that two of these were angels. Veiling their glory, they appeared to Lot in Sodom and ate and drank with him. Genesis 19:10, 11 shows the amazing power of angels, for these two reached out and smote the troublemakers at Lot’s door with blindness. See also Hebrews 2:13.

Angels are extremely strong. They “excel in strength,…” Psalm 103:20. They are invisible to the naked eye, and yet God sometimes opens the eyes of men so they can see angels. See 2 Kings 6:14-17. Even the eyes of dumb animals are opened at times to see angels. See Numbers 22:22-33. The speed of angels is beyond comprehension; in one Biblical example, Daniel began praying; and before his prayer was finished, the answer was brought by the angel Gabriel from heaven. Daniel 9:21. At times angels are described as glorious and beautiful heavenly beings. The angel who rolled away the stone from the sepulcher at the resurrection of Christ was described like this: “His countenance was lightning, and his raiment white as snow.” Matthew 28:3. Isaiah 6:2 and Ezekiel 1:6, 9 reveal that angels have wings. They are happy beings! Observe their joyful part in the birth of Christ. Luke 2:8-15. They rejoice when sinners turn to God. “Likewise, I say unto you, there is joy in the presence of the angels of God over one sinner that repenteth.” Luke 15:10.

Each child of God has a guardian angel. Matthew 18:10. Angels cooperate with the Father and the Son in the plan of salvation. 1 Timothy 5:21. Jacob, in his dream at Bethel, saw angels ascending and descending between heaven and earth on a ladder, ever ready to do the will of God in helping mankind. Genesis 28:12-15. Countless Bible stories relate the protecting care and assistance angels have rendered to men. For example, Psalm 34:7 says, “The angel of the Lord encampeth round about them that fear Him, and delivereth them.” As proof of this, read about Daniel’s miraculous preservation in the lions’ den. Daniel’s own testimony was: “My God hath sent His angel, and hath shut the lions’ mouths, that they have not hurt me:…” Daniel 6:22.

Another part of the heavenly angels’ work was to strengthen Christ during His life on earth. He was strengthened by heavenly angels after His temptation in the wilderness. Matthew 4:11. Again, strengthening power for prayer was given to Christ in the Garden of Gethsemane as He submitted to the will of God in His forthcoming death on the cross. Luke 22:39-44. Sometimes angels have been sent by God to destroy wicked people who have passed the limits of mercy. Read the amazing stories in 2 Kings 19:35 and Acts 12:21-23. 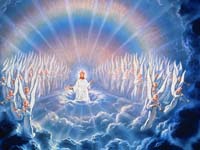 “But ye are come unto mount Sion, and unto the city of the living God, the heavenly Jerusalem, and to an innumerable company of angels.” Hebrews 12:22. This text shows that there are vast numbers of holy angels in heaven. Daniel 7:10 and Revelation 5:11 reveal the same thought – “ten thousand times ten thousand, and thousands of thousands” of angels.

The Scriptures reveal that at Christ’s second coming all of these holy angels will come with Him. Matthew 16:27; 24:31. Then we will be able to see them, for sin will be gone and will no longer cloud our eyesight.

The angels are perfectly organized and will appear like armies when they accompany Christ on His return. “And the armies which were in heaven followed Him upon white horses, clothed in fine linen, white and clean.” Revelation 19:14.

To everyone who overcomes sin through the grace of Christ will be granted for all eternity the privilege of seeing and conversing with the angels who have ministered to us so kindly during our earthly pilgrimage.