Adam and Eve, the first human pair, were the crown of God’s creation; their physical condition was perfect, and they were pure of heart. All things were under their dominion. Furthermore, they had the special privilege of communing with God face to face and had the companionship of holy angels.

Man was given everything he needed for happiness 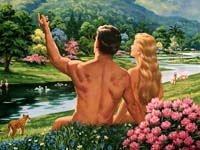 “And the Lord God planted a garden eastward in Eden; and there He put the man whom He had formed. And out of the ground made the Lord God to grow every tree that is pleasant to the sight, and good for food; the tree of life also in the midst of the garden, and the tree of knowledge of good and evil.” Genesis 2:8, 9.

“Everything that God had made was the perfection of beauty, and nothing seemed wanting that could contribute to the happiness of the holy pair; yet the Creator gave them still another token of His love, by preparing a garden especially for their home. In this garden were trees of every variety, many of them laden with fragrant and delicious fruit…There were fragrant flowers of every hue in rich profusion. In the midst of the garden stood the tree of life, surpassing in glory all other trees. Its fruit appeared like apples of gold and silver, and had the power to perpetuate life.” – Ellen G. White, Patriarchs and Prophets, pp. 46, 47. Physically, emotionally, spiritually, and intellectually, man had everything.

Created in God’s image and the crowning work of creation, man was given the capacity of choice. God could have created man without this choice, but then he would have been a mere automaton, no higher than the animals and as such incapable of communicating with God. “…While everything in nature is governed by natural laws, man alone, of all that inhabits the earth, is amenable to moral law. To man, …God has given power to understand His requirements, to comprehend the justice and beneficence of His law, and its sacred claims upon him; and of man unswerving obedience is required.” – Patriarchs and Prophets, p. 52.

What was the test which would reveal man’s choice? “And the Lord God commanded the man, saying, Of every tree of the garden thou mayest freely eat: But of the tree of the knowledge of good and evil, thou shalt not eat of it: for in the day that thou eatest thereof thou shalt surely die .” Genesis 2:16, 17. This test would show whether man would obey the first great commandment. Compare Deuteronomy 6:5; 5:6, 7; and Matthew 22:37, 38. All intelligent beings in the universe are likewise tested. We learned in Lesson 3 that Lucifer and a good number of angels chose not to obey their loving Creator; they preferred to love themselves more than God.

The temptation and fall 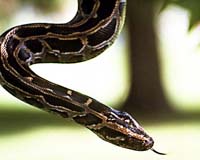 Only in perfect obedience to God could man be safe from the temptations of the rebel against God, who was now seeking a base for his rule. There was no reason for the first pair to yield to Satan, nor any excuse for sin, for they had been clearly warned to avoid the forbidden tree. Had not God Himself given them every good thing? Did they have any reason to be disloyal to Him?

The Bible records the tragic story of how man yielded to temptation and became a slave to Satan and his cruel works.

Satan chose a serpent as a medium to conceal his deceptive work. Genesis 3:1-3. The serpent was well suited to his purpose, as it was the wisest, most beautiful creature on earth, with wings and a glittering appearance; the beholder was entranced by its beauty.

Eve’s first mistake was leaving her husband’s side and approaching the forbidden tree. This permitted Satan to speak to her and ask a question intended to create doubt in her mind concerning the express command of God never to touch or eat from the tree of the knowledge of good and evil. He twisted the meaning of God’s command by asking, in other words, “Really? Did God actually say you could never eat from this lovely tree?” Eve’s answer showed that she understood God’s command perfectly.

Now Satan pronounced his first lie to man. “Ye shall not surely die.” Genesis 3:4, 5. In actuality he declare, “God is a liar and doesn’t mean what He says!” Satan promised man natural immortality if he would transgress God’s command. Here he laid the foundation for later heathenism and spiritualism, which we shall discuss in a later lesson.

The immediate result of Eve’s disobeying God was that her eyes were opened, which was an acknowledgment of sin. Genesis 3:6, 7. Eve was deceived and fell into sin. But when she took some of the forbidden fruit to Adam and urged him to eat it, he sinned with open eyes from love for and loyalty to his life’s companion. See 1 Timothy 2:14. Both had proved unfaithful to their loving Creator. The cause of their fall was covetousness – wanting something they did not have. See 1 John 2:16. In actuality, by failing this small test, they broke a number of God’s commandments. See Exodus 20:1-3, 15, 17.

Results of the fall 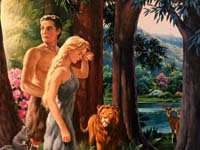 The radiance of heavenly purity, with which the heretofore sinless pair had been clothed, now departed from them. Genesis 3:7.

Happiness turned to fear and a guilty conscience. Genesis 3:10.
The first curse fell upon the serpent. Genesis 3:13, 14.
Next, punishment fell on the woman. Genesis 3:16.
The greatest punishment was for Adam. For his sake the earth was cursed. Genesis 3:17-19.

Man was not left without hope

God had created man holy and happy; the earth, as it came forth from the Creator’s hand, bore no shadow of corruption, pollution, or any imperfection. Because of the transgression, or breaking, of God’s law of love, death and misery entered the world. Satan was delighted to have triumphed over man. He hoped this would lead to triumph over God Himself. In the midst of the suffering that sin brought, however, God revealed a wonderful plan for man’s redemption. He told Adam, and thus all mankind, that He was willing to give His only Son, Jesus, to die in man’s place. This would restore man once more to fellowship with God. Jesus’ death would provide forgiveness for man’s sin and grant him the privilege of eternal life. Satan’s eventual overthrow and destruction would be made sure, and man could rejoice in the hope of the restoration of God’s image in him. Genesis 3:15. The promise of salvation bridged the abyss of sin and filled man’s heart with hope and joy. Through faith in Jesus, man could be saved! Oh, wondrous love of God!

Did you ever think what this world would be

If Christ hadn’t come to save it?
His hands and feet were nailed to the tree,
And His precious life – He gave it.
But countless hearts would break with grief,
At the hopeless life they were given,
If God had not sent the world relief,
If Jesus had stayed in Heaven.

Did you ever think what this world would be,
If Christ had stayed in Heaven,
No home in bliss, no soul set free,
No life, or sins forgiven?
But He came with a heart of tenderest love,
And now from on high He sees us,
And mercy comes from the throne on high.
Thank God for the gift of Jesus!