Lesson 7 – History in a Nutshell 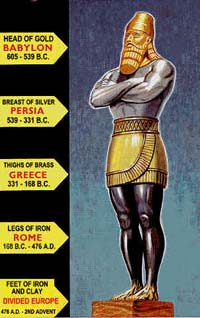 that twenty-six hundred years ago, the great Ruler of the universe gave a concise and precise view of the major world events that would occur from that time until Jesus’ second coming? “Declaring the end from the beginning, and from ancient times things that are not yet done” (Isaiah 46:10 KJV), our awesome God gave a clear view of earth’s destiny. Why? Because He loves us so much! “Surely the Lord God does nothing, unless He reveals His secret to His servants the prophets” (Amos 3:7). Let’s see how accurately God reveals the future so far in advance.

The book of Daniel presents three prophecies that we may call “the ABC’s of Bible prophecy.” They progressively lay a foundation for understanding the great prophetic symbols of the book of Revelation. In this study, we will begin with the “A” of Bible prophecy.

Daniel the prophet was a young Hebrew prince taken captive by the armed forces of Babylonian King Nebuchadnezzar. With other privileged youth, Daniel was trained for a diplomatic career in the expanding Babylonian Empire. Life’s opportunities were before him; and yet, surrounded by seductive temptations at the idolatrous royal court, Daniel determined to remain true to God. He and three other Hebrew captives politely but firmly refused to identify with the worship of pagan deities. In recognition of their faithfulness, “God gave them knowledge and skill in all literature and wisdom; and Daniel had understanding in all visions and dreams.” “And in all matters of wisdom and understanding about which the king examined them, he found them ten times better than all the magicians and astrologers who were in all his realm” (Daniel 1:17, 20). In response to a crisis, God gave Daniel the revelation that foretold twenty-six hundred years of …

History in a Nutshell

1. How did God introduce the prophecy presented in Daniel 2?
“In the second year of Nebuchadnezzar’s reign … the king gave the command to call the magicians, the astrologers, the sorcerers, and the Chaldeans…. And the king said to them, ‘I have had a dream, and my spirit is anxious to know the dream’” (Daniel 2:1-3). (The word “spirit” has several meanings in the original languages, as it does in English. In Lesson 10, question 4, you will find it to mean “breath.” Here it simply means “mind.”) Nebuchadnezzar understood that this was no ordinary dream.

2. How did the wise men answer the king?
“O king, live forever! Tell your servants the dream, and we will give the interpretation” (Daniel 2:4). Since these men claimed to communicate with “the gods,” the king rightfully expected them to tell him the forgotten dream. Of course, because they had no connection with the true God, they couldn’t help the king. Nebuchadnezzar commanded that all the wise men of the realm be put to death (Daniel 2:4-15).

3. How were the lives of the “wise men” spared?
“Then Daniel … made the [king’s] decision known to … his companions, that they might seek mercies from the God of heaven concerning this secret…. Then the secret was revealed to Daniel in a night vision” (Daniel 2:7-10). Classed with the wise men of Babylonia, Daniel and his three friends would also have been killed. After the four young men united in prayer, God showed Daniel the dream in a night vision. The next morning Daniel was granted an audience with the king (Daniel 2:16-25).

4. When Nebuchadnezzar asked Daniel to describe the dream, what did he make clear?
“The secret which the king has demanded, the wise men, the astrologers, the magicians, and the soothsayers cannot declare to the king. But there is a God in heaven who reveals secrets” (Daniel 2:27-28). Daniel carefully, decidedly, gave credit where credit was due.

5. What had occupied the king’s mind as he retired that evening, before he had his dream?
“As for you, O king, thoughts came to your mind while on your bed, about what would come to pass after this” (Daniel 2:29). Nebuchadnezzar and his father, Nabopolassar, had invested a great deal of effort to consolidate the Babylonian Empire and build the beautiful city of Babylon, famous for the Hanging Gardens Nebuchadnezzar had created for his Median wife, Amyitis. (An empire is a union of conquered kingdoms or nations under one central government. An emperor reigns when all challengers and rivals have been subdued.) These gardens were one of the seven wonders of the world. It’s no surprise the king was concerned about the future of Babylonia! God used the occasion to show that He not only controlled the future of that empire but that He would also be in control of successive kingdoms down to “the latter days” (Daniel 2:28).

6. How did Daniel describe this striking dream? 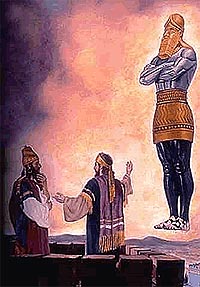 “You, O king, were watching; and behold, a great image! This great image, whose splendor was excellent, stood before you; and its form was awesome. This image’s head was of fine gold, its chest and arms of silver, its belly and thighs of bronze, its legs of iron, its feet partly of iron and partly of clay. You watched while a stone was cut out without hands, which struck the image on its feet of iron and clay, and broke them in pieces. Then the iron, the clay, the bronze, the silver, and the gold were crushed together, and became like chaff from the summer threshing floors; the wind carried them away so that no trace of them was found. And the stone that struck the image became a great mountain and filled the whole earth” (Daniel 2:31-35). In the dream, God presented the world empires in symbols to which the king could readily relate: bright, precious metals in a powerful exhibition of worldly splendor.

7. What does the golden head symbolize?
“You, O king, are a king of kings. For the God of heaven has given you a kingdom, power, strength, and glory; and wherever the children of men dwell, or the beasts of the field and the birds of the heaven, He has given them into your hand, and has made you ruler over them all–you are this head of gold” (Daniel 2:36-38). Pure gold in abundance embellished the city of Babylon and its pagan temples. The statue to the god that King Nebuchadnezzar worshipped, with accompanying table and altar, as well as his own throne, were all of pure gold.

8. What was to become of the king’s empire?
“After you shall arise another kingdom inferior to yours” (Daniel 2:39). Bad news for him! In the year B.C. 538, during the reign of Nebuchadnezzar’s irresponsible grandson, Belshazzar, Babylonia was conquered by the Medes and Persians. Their army was led by General Cyrus. The silver chest and arms of the image fitly symbolize these twin nations. Although much larger than Babylonia and a marvel of administration, Medo-Persia was not as glorious, just as silver is not as valuable as gold. It is noteworthy that the Persian Empire required all taxes to be paid in silver.

9. Which world empire was to succeed Medo-Persia?
“Then another, a third kingdom of bronze,… shall rule over all the earth” (Daniel 2:39). The Greeks, under Alexander the Great, conquered Medo-Persia in B.C. 331. The thighs represent the Greek empire. Significantly, Alexander used bronze weapons and shields.

10. What was the fourth world empire, and what was it to be like?
“And the fourth kingdom shall be as strong as iron, inasmuch as iron breaks in pieces and shatters all things; and like iron that crushes, that kingdom will break in pieces and crush all the others” (Daniel 2:40). In B.C. 168 the Greeks were forced to yield world dominion to the Romans, symbolized by the legs of iron. The Romans used weapons made of forged iron. This powerful kingdom dominated western civilization for six centuries, until A.D. 476.

11. What do the statue’s feet and toes symbolize?
“Whereas you saw the feet and toes, partly of potter’s clay and partly of iron, the kingdom shall be divided; yet the strength of the iron shall be in it…. And as the toes of the feet were partly of iron and partly of clay, so the kingdom shall be partly strong and partly fragile” (Daniel 2:41-42). During the “migration of nations,” which started about A.D. 300 (and lasted more than two hundred years), the deteriorating Roman Empire was invaded by barbarian tribes. These tribes settled in the territory previously occupied by Western Rome and developed into the Western European nations we know today. The ten toes symbolize these nations.

12. What quality of this mixture of iron and clay characterizes Western Europe?
“They will mingle with the seed of men; but they will not adhere to one another, just as iron does not mix with clay” (Daniel 2:43). Try as they would, these nations could not merge. The royal houses of Western Europe endeavored to bind the nations together by intermarriages, but they failed. Strong kings and rulers, such as Charlemagne, Charles V, Louis XIV, Napoleon Bonaparte, and Adolf Hitler, attempted to unite these nations; but just when it looked as though they would succeed, their unions crumbled! Today the European Union (EU) is attempting a step-by-step integration of the same nations, but prophecy says that this too will fail.

13. What great event will take place while the nations of Western Europe are still divided?
“In the days of these kings the God of heaven will set up a kingdom which shall never be destroyed; and the kingdom shall not be left to other people; it shall break in pieces and consume all these kingdoms, and it shall stand forever. Inasmuch as you saw that the stone was cut out of the mountain without hands, and that it broke in pieces the iron, the bronze, the clay, the silver, and the gold” (Daniel 2:44-45). Soon God will replace the nations of earth with His own kingdom. The stone striking the image at its base fitly represents Christ’s second coming. As the stone was cut out without hands, so no human being will set up this kingdom. God will. Notably, Jesus once quoted an Old Testament prophecy about Himself: “The stone which the builders rejected has become the chief cornerstone” (Matthew 21:42).

Here is history in a nutshell: Eight concise verses (Daniel 2:37-44) precisely foretold the main political events that, in fact, did take place over the last twenty-six hundred years. Now we are at the threshold of God’s everlasting kingdom on earth. “The dream is certain, and its interpretation is sure” (Daniel 2:45).

What about … NEBUCHADNEZZAR’S DREAM? 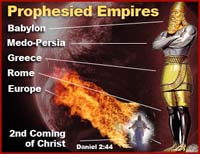 • What else can be learned from the king’s dream? No doubt, as each conqueror came on the scene, he planned to improve the world. But, although the strength of the metals increased from the head to the feet, their value decreased. Daniel put it this way: “After you shall arise another kingdom inferior to yours” (Daniel 2:39). Is our modern Western civilization superior to the empires that preceded it? God portrayed our modern European nations to King Nebuchadnezzar as a strange mixture of iron and clay. Do you know why? (Refer back to questions 11 and 12.)

Now that you’ve digested the “A” (world history as presented to a monarch) in the “ABC’s of Bible Prophecy,” how about “Filling in the Picture” with the same segment of world history from a prophet’s point of view? See the next lesson, number 8.