Queen of the world’s mountain peaks, Mount Everest rises in stately majesty in the Himalayan range on the borders of Nepal and Tibet, an astounding 5½ miles high (29,035 feet or 8,850 meters; see http://classic.mountainzone.com/news/99/everestheight.html and http://www.extremescience.com/everest.htm). The eccentric, inhospitable slopes of this highest point on Earth long defied attempts at conquest. To the extremely skillful native mountaineers, the Sherpas, the higher Himalayan ranges were considered to be the abode of the gods and off-limits to humans. Between 1921 and 1953, more than twelve climbing expeditions attempted the ascent but failed; and lives were lost.

Nonetheless, on May 29, 1953, fully aware of the physical and psychological barriers, Edmund Hillary, a 33-year-old beekeeper from New Zealand, and Tenzing Norgay, a Nepalese Sherpa, made it to the top. The eighty-day venture was supported by 400 team members, who set up nine camps of supplies.

What contributed to their success? Hillary was realistic about his own capabilities and looked for competent helpers before starting his ascent. In his own words: “I have modest abilities; I combine these with a good deal of determination, and I rather like to succeed.”

While descending Mt. Everest, Norgay saved Hillary’s life during a mishap in a crevasse field. A man of character, Hillary did not take this as a matter of course, nor did he just settle for the laurels after the climb. Rather, he showed his gratitude by helping Norgay’s people establish more than thirty schools, two hospitals, and twelve medical clinics, considering them his “most worthwhile” accomplishments. He stated: “It is not the mountain we conquer but ourselves.”

In 1996 fifteen people died on Mt. Everest’s slopes. (As of the end of 2007, Mount Everest had been surmounted by 2,436 climbers, who made 3,679 ascents–some climbed the mountain more than once–and 210 climbers had died on its slopes; source: Wikipedia, Mount Everest.) Norgay’s son Jamling, also a veteran climber, saw carelessness and over-confidence as contributors to these fatalities. “I believe strongly,” he said, “that when you climb this mountain you have to climb [as] a child crawling up to its mother’s lap. You don’t conquer Mount Everest. We believe climbing with pride, arrogance and disrespect can lead to trouble.”

Mount Everest was considered Earth’s last frontier. Yet, there is another! It beckons for our attention and challenges our highest ambitions. Hillary alluded to it, and Henry Clay summed up the convictions of many: “Of all the properties which belong to honorable men, not one is so highly prized as that of character.”

1. Does Jesus agree that character is important? What goal did He establish for us?
In His Sermon on the Mount, Jesus described a good character. Then He said: “You shall be perfect, just as your Father in heaven is perfect” (Matthew 5:48). Perfect? Is God really expecting us to be perfect? Yes, but not according to our own standards. He came to show us how and offers to help.

2. How does the Bible esteem the self-conquest that Hillary spoke of?
“He who is slow to anger is better than the mighty, and he who rules his spirit than he who takes a city” (Proverbs 16:32). The Bible highly values self-control.

3. How did some of the best, strongest, and wisest persons on Earth fare with self-conquest?
Samson, who ripped off two huge city gates, doorposts and all, and carried them to a hilltop (Judges 16:3), died a victim of his own presumption. King Solomon, the wisest man who ever lived, traded God’s wisdom for his own foolishness and vanity (1 Kings 11:1-8). “Alexander and Caesar found it easier to subdue a world than to subdue themselves. After conquering nation after nation, they fell–one of them ‘the victim of intemperance, the other of mad ambition.’” (Ellen G. White, “Good Health,” Health Reformer, November 1, 1880.) Only one person in history met every temptation with a firm “No.”

4. Who was that exception? 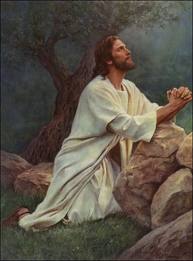 5. Was Christ’s nature superior to ours?
God sent “His own Son in the likeness of sinful flesh” and “condemned sin in the flesh” (Romans 8:3). Some think that sinlessness was easy for Him because He was God. But Jesus adopted a human nature identical to ours and, in this weak state, tempted as we are–from without and from within–He demonstrated that it is possible to trust God fully and thus conquer sin, even while under temptation and great stress. Had Jesus been immune to sin, He couldn’t have been tempted. Satan sorely tempted Him yet consistently failed to induce Jesus to sin.

6. Was Jesus given special assurance of Heaven’s support? What does this mean to us?
“When He had been baptized,… suddenly a voice came from heaven, saying, ‘This is My beloved Son, in whom I am well pleased’” (Matthew 3:16-17). These words of approval from the Father to His Son represent God’s approval of all His believing children (Ephesians 1:4-6). It’s a tremendous assurance that God loves us as much as He does His own Son (John 17:23)!

7. What severe ordeal did Jesus experience immediately after His baptism?
“Then Jesus was led up by the Spirit into the wilderness to be tempted by the devil” (Matthew 4:1). (Please read all of Matthew 4:1-11 and Hebrews 4:16. Christ’s victory over sin gives us hope.) With the sense of the Father’s approval and by exercising firm reliance on God’s Word, Jesus conquered the temptations of 1) appetite, 2) presumption, and 3) covetousness–the very temptations that ensnared Adam and Eve. With Heaven’s assurance of acceptance fresh in His mind, the Saviour resolutely resisted the devil.

8. Where did Jesus confirm His commitment to suffer and die for the lost race? 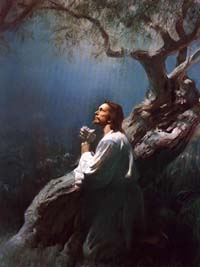 In the Garden of Gethsemane, the sin and guilt of the whole world were laid on Jesus (Isaiah 53:4-8). “My soul is exceedingly sorrowful,” He exclaimed, “even to death” (Matthew 26:38). Stressed to the limits, His human nature recoiling from what lay ahead, He “fell on His face, and prayed, saying, O My Father, if it is possible, let this cup pass from Me; nevertheless, not as I will, but as You will” (verse 39). Out of love for us, Jesus renounced every thought of a comfort zone and renewed His holy determination to suffer and die. He refused to turn aside or go back. He set His face as steel to face the upcoming events and a most humiliating death by crucifixion (Isaiah 50:6-7).

9. Where did Jesus, and where may we, always obtain strength to do what needs to be done?
Jesus said, “I can of Myself do nothing” (John 5:30). And He encouraged His disciples: “Watch and pray, lest you enter into temptation. The spirit indeed is willing, but the flesh is weak” (Matthew 26:41). To the Father, Jesus said, “I know that You always hear Me” (John 11:42). He responded to the devil, “It is written …” (Matthew 4:4, 7, 10). And in severe temptation, “He went away again a second [and third] time and prayed ‘O My Father, if this cup cannot pass away from Me unless I drink it, Your will be done’” (Matthew 26:42, 44). Jesus conquered Himself by (1) recognizing His own limitations and, (2) in faith, (3) compensating for these human limitations by connecting His humanity to God’s divine strength in frequent prayer, (4) holding firmly to God’s Word, and (5) submitting completely to God. Then it was God who gave Jesus the strength to overcome.

10. Where did Jesus gain the ultimate victory over sin, Satan, and death?
Nailed to the merciless cross of Calvary, Jesus paid for humanity’s failure to obey. With His last breath, Jesus cried, “IT IS FINISHED!” (John 19:30). This immense victory convinced the universe (Colossians 1:16, 20) that God is love. Jesus poured out His soul (Isaiah 53:12) as God’s sacrifice for sin; He suffered, bled, and died rather than giving up on us, a race of sinners.

11. What does the challenge of successfully climbing life’s summit involve?
Jamling Norgay said, “You don’t conquer Mount Everest.” Neither is it for us to conquer the world. Jesus said, “I have overcome the world” (John 16:33). Our task is self-conquest.

In faith we may choose to follow Jesus to Earth’s true pinnacle (what significance does going there have for us? “Kneeling in faith at the cross, [a person] has reached the highest place to which man can attain”–E.G. White, The Acts of the Apostles, p. 209), Mount Calvary, where we can view New Horizons; for it was there that God’s infinite mercy met the demand of justice. Psalm 85:10; Romans 3:26.

Jamling Norgay held that one must climb Mt. Everest with the respect of a child climbing onto its mother’s lap. So with Mt. Calvary: “That which even the greatest and wisest cannot earn, the weakest and most humble may receive. Heaven’s golden gate opens not to … the proud in spirit. But the everlasting portals will open wide to the trembling touch of a little child.” (E.G. White, Christ’s Object Lessons, p. 404.)

By faith Jesus submitted His will to His Father’s and was thus enabled to stand tall in trial. So we may also conquer self and sin and develop honorable characters.

12. What rewards await us at life’s “summit”?
The rewards are boundless both now and in eternity. God promises, “I will set [you] on high” (Psalm 91:14). A life that is in harmony with the life of God may be ours. This is God’s Agenda, our New Horizons. “The crown of glory awaits those who bow at the foot of the cross.” (E.G. White, Testimonies for the Church, vol. 5, p. 475.)

Seven Pieces of Equipment Needed to Scale the Spiritual Summit 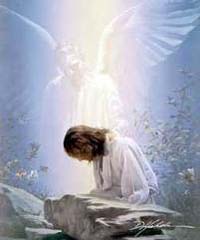 TRUSTING GOD IS THE SECRET TO CONQUEST:

V–Value: Believe that you are very precious in God’s sight (Isaiah 43:4). On the cross, Christ confirmed the value of every person! A sense of worth inspires us to live honorably.

C–Complete: Believe that “you are complete in Him” right now (Colossians 2:10) because Jesus’ righteousness covers you. He wants to live His holy life in you (Galatians 2:20).

T–Take God’s word as your guide. “All scripture is … profitable for doctrine, for reproof, for correction, for instruction in righteousness” (2 Timothy 3:16).

O–Others: As we focus on the needs of others and share our blessings, our deficiencies will gradually lessen and be overcome. “It is more blessed to give than to receive” (Acts 20: 35).

R–Reconsider: Habitually examine your actions and motives; then correct your failures. “Keep your heart with all diligence, for out of it spring the issues of life” (Proverbs 4:23).

Y–Yourself: Give yourself entirely to Jesus. Understand this paradox: Only in full surrender to Him can we have victory. “Submit yourselves therefore to God” (James 4:7).

What about … THE SIGNIFICANCE OF BIBLE SUMMITS?

• What significant spiritual summits are there to scale?
There will be wonderful heights to scale here and throughout eternity. To those who respect God’s Law, He promises an eternity of “highs.” “You shall delight yourself in the Lord; and I will cause you to ride on the high hills of the earth, and feed you with the heritage of Jacob your father. The mouth of the Lord has spoken” (Isaiah 58:14).

1. Mt. Sinai, 7,497 feet above sea level (http://en.wikipedia.org/wiki/Mount–Sinai), where Jesus proclaimed the Ten Commandments to His people. This summit represents God’s holy character, for His moral law embodies His character.

2. The unknown hill near the Sea of Galilee where Jesus preached His sermon (Matthew 5-7) and spread out His panoply of blessing over struggling people in a world of sin.

3. Mt. Calvary, where Jesus died for our sins, is the pinnacle of human experience, where we, who are unable to climb Mt. Sinai to meet God’s standard, find strength and true freedom to succeed. “I can do all things through Christ who strengthens me” (Philippians 4:13).

4. Beautiful Mt. Zion, where Israel gathered three times a year to worship God together at the magnificent temple, represents our warm communion with God and one another, both here and in eternity. Revelation 21:1-3. Having learned to know and cherish Christ, we’ll praise Him for everything, rejoice in a face-to-face friendship with God, and live together in the beautifully recreated earth. “Beautiful…, the joy of the whole earth, is mount Zion” (Psalm 48:2 KJV).