Separated from the love of God …

man’s heart generates evil and strife. At the dawn of history, Cain introduced foul play when he killed his brother. In 1968, historians Will and Ariel Durant calculated that in more than 3,421 years of recorded history, the world had enjoyed only 268 years of peace. (Will and Ariel Durant, The Lessons of History, Fine Communications, 1997, p. 81.)

Ever since World War II, it has been common knowledge that a nuclear war would be universal suicide. Leaders have exercised much restraint in the interest of human survival. Yet a number of years ago an article in a leading periodical reported that since World War II there had been 231 armed conflicts active in 151 locations throughout the world. (www.jpr.sagepub.com/cgi/reprint/43/5/617.pdf.) Any one of them could have ignited a third world war! Nations have acquired enough explosives to blow up the world many times over. This planet has become very dangerous.

“I saw four angels standing at the four corners of the earth,” wrote the apostle John, “holding the four winds of the earth, that the wind should not blow on the earth, on the sea, or on any tree” (Revelation 7:1). Remember (from Lesson 8, question 1), winds symbolize war. Angels of God have actively restrained war in the four “corners” of the world so that the work of salvation can be finished before Jesus returns. Were it not for this, the earth would have become uninhabitable long ago! But God controls …

1. In what two opposing individuals do good and evil, peace and strife, center?
Christ said of Satan, “He was a murderer from the beginning [of sin].” “The thief does not come except to steal, and to kill, and to destroy. I have come,” Jesus said of Himself, “that they may have life, and that [people] may have it more abundantly” (John 8:44; 10:10). “Satan delights in war, for it excites the worst passions of the soul and then sweeps into eternity its victims steeped in vice and blood. It is his object to incite the nations to war against one another, for he can thus divert the minds of the people from the work of preparation to stand in the day of God.” (E.G. White, The Great Controversy, Mountain View, CA, Pacific Press Publishing Assn., 1911, p. 589. See also Isaiah 14:16-17, 20; 9:6.)

2. What do people long for? 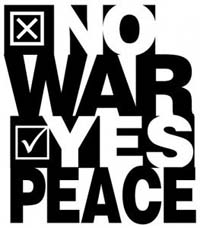 In the time leading up to World War I, there was a worldwide peace movement. Its slogan? “No More War!” Three hundred sixty peace treaties were signed. Until the evening before the war erupted, statesmen attempted by diplomacy to avert the catastrophe. “For when they say, ‘Peace and safety!’ then sudden destruction comes upon them, as labor pains upon a pregnant woman. And they shall not escape” (1 Thessalonians 5:3). Most people long for peace.

4. With the threat of war looming over mankind, what does “the everlasting gospel” (Revelation 14:6) offer?
Jesus said, “These things I have spoken to you, that in Me you may have peace. In the world you will have tribulation; but be of good cheer, I have overcome the world.” “Behold! The Lamb of God who takes away the sin of the world!” (John 16:33; 1:29). In the face of the strong, universal, downward pull to destruction, the Saviour of mankind is lifted up before the people of all nations as the only one who offers peace with God and life eternal. He who has peace with God will be at peace with all men.

5. How does a Christian relate to armed conflicts and war?
God commanded, “You shall not murder.” “Whatever you want men to do to you, do also to them, for this is the Law and the Prophets” (Exodus 20:13; Matthew 7:12). War is incompatible with the spirit of Christ.

6. Who alone has the right to revoke life?
“There is no God besides Me; I kill and I make alive.” “Beloved, do not avenge yourselves, but rather give place to wrath; for it is written, ‘Vengeance is Mine, I will repay,’ says the Lord” (Deuteronomy 32:39; Romans 12:19). Only He who creates life may revoke it.

7. Does God make any exceptions to the universal prohibition against taking human life?
One. The civil authority “does not bear the sword in vain; for he is God’s minister, an avenger to execute wrath on him who practices evil” (Romans 13:4). As in the time of Israel, God authorizes civil governments to execute justly tried and convicted criminals.

8. If war is not of God, why did He command Israel to destroy entire nations in Canaan?
“[Ahaz, a wicked Israelite king] burned incense in the Valley of the Son of Hinnom, and burned his children in the fire, according to the abominations of the nations whom the Lord had cast out before the children of Israel” (2 Chronicles 28:3). Greed, revenge, or politics did not fuel God-initiated Old Testament wars. After ample time and opportunity to change had been given these grossly immoral nations (they even burned their children as offerings to pagan deities!), God Himself (1) tried, (2) convicted, and (3) commanded Israel to execute the Canaanites, leaders and people alike. Psalm 149:4-9.

9. Can some of the wars waged today be classified as executions ordained by God?

No. The executions mentioned above were performed when ancient Israel was a theocracy. A theocracy means that God Himself governed the nation directly through prophets and the Urim and Thummim on the high priest’s breastplate. Exodus 28:30; Numbers 27:21. “You led Your people like a flock by the hand of Moses and Aaron” (Psalm 77:20). However, when Israel despised its God-given privileges by repeatedly stoning the prophets, God finally abolished the theocracy and thus revoked the right to execute. Six hundred years later, when the Jews rejected the Saviour, God rejected Israel as His special people and entrusted Christ’s New Testament church with the task of evangelizing the world. When Christ died, He separated the church from the state to prevent religious persecution and spread His people throughout the world to be “the salt of the earth” and the “light of the world.” Matthew 5:13-14. Today, because God calls no nation His own, He gives no nation the right to execute people of other nations.

10. What is Jesus’ teaching about violence?

a) When two disciples wanted to have the Samaritans punished for insulting Christ, He said, “The Son of Man did not come to destroy men’s lives but to save them” (Luke 9:56).

c) Jesus also said, “I tell you not to resist an evil person. But whoever slaps you on your right cheek, turn the other to him also” (Matthew 5:39).

d) In no instance did Jesus condone violence, even in self-defense. John the Baptist commanded soldiers to “do violence to no man.” Luke 3:14 KJV.

11. What divine principle does Jesus offer as the response to hatred, revenge, strife, and persecution? 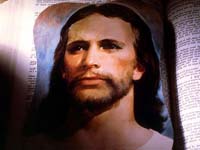 “Blessed are the peacemakers: for they shall be called the children of God.” “But I say to you, love your enemies, bless those who curse you, do good to those who hate you, and pray for those who spitefully use you and persecute you” (Matthew 5:9 KJV, 44 NKJV). Loving our enemies is incompatible with killing them! We are to love as Christ loved and leave God to mete out punishment, rather than as private citizens taking the law into our own hands.

While imprisoned on the island of St. Helena at the end of his life, the militant emperor Napoleon Bonaparte came to the following conclusion: “Alexander [the Great], [Julius] Caesar, Charlemagne and I have founded large empires; but upon what have we built the creations of our geniuses? Upon violence. Jesus alone founded His kingdom upon love.”

What about … GOD’S ADMINISTRATION OF JUSTICE?

• Why did God order the destruction of not only the Canaanite adults but also their children?
Whatever reasons God may have given the Israelites, those reasons are not recorded in the Bible. We can imagine, however, what might have happened if He hadn’t destroyed the children. Judging from the numbers that were killed, as recorded in the Bible, there were no doubt many more Canaanite children in the land than there were Israelites. If these children were spared, the Israelites would have had to take responsibility for them. There would have been at least several for each family. Considering that the pagan nations had grossly perverted themselves, and that sinful tendencies are both learned and inherited, how might their children have influenced the children of the Israelites and affected the destiny of the nation?

• Was Christ’s driving the vendors from the temple a violent act?
No. “When He had made a whip of cords, He drove them all out of the temple, with the sheep and the oxen, and poured out the changers’ money and overturned the tables” (John 2:15; see also Mark 11:15-17). God had not yet rejected the Jewish nation or the temple. The sellers had defiled the sacredness of His house, and they knew it. Christ did not physically harm them, even though they had violated His temple.

• Does Christ’s standard of love and non-violence work in a violent world?

Jesus said: “Therefore you shall be perfect, just as your Father in heaven is perfect” (Matthew 5:48). Christ came to this world to teach us how to apply heavenly principles to practical, day-to-day situations in an evil world! We may not be able to predict what we would do in each difficult situation, but we need to know what we ought to do. That will help us to respond in God’s way if we ask His help. God never asks us to do anything without also promising to help us do it.

“Give me liberty or give me death!” exclaimed Patrick Henry. Lesson 21 (“Liberty at Stake!”) brings us face to face with two present-day powers that conspire to curtail our civil and religious liberties. It also explains the mark of the beast. Will this mark bring us liberty–or death?