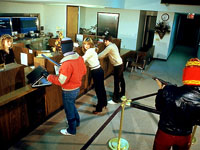 Do you ever wonder why?

“Then God saw everything that He had made, and indeed it was very good.” “God made man upright” (Genesis 1:31; Ecclesiastes 7:29). Our world came from the Creator’s hand perfect and beautiful. People and animals were healthy and innocent. There was no evil.

So what happened? Because we have grown accustomed to degenerating conditions in our world, it may not occur to us that this is not normal and that our world has been in a state of emergency for close to six thousand years! To understand how this came about, we need to know about …

1. How did evil originate?
“O Lucifer, son of the morning!… You have said in your heart: ‘I will ascend into heaven, I will exalt my throne above the stars of God; I will also sit on the mount of the congregation on the farthest sides of the north; I will ascend above the heights of the clouds, I will be like the Most High.’” “The devil … sinned from the beginning [of sin]” (Isaiah 14:12-14; 1 John 3:8). Lucifer, personified as the king of Tyre, was the most beautiful, talented, and admired of all the angels. Ezekiel 28:11-17. At some point he became envious of God and rebelled against Him! Lucifer persuaded a number of angels to join him.

2. What is sin, and what does it do?
“Sin is the transgression of the law” (1 John 3:4 KJV). God’s moral law, the Ten Commandments, defines sin. Since good and evil cannot coexist, sin separates the sinner from God, the source of life. Death is the natural result. “The wages of sin is death” (Romans 6:23).

3. How was it possible for sin to enter a perfect universe? 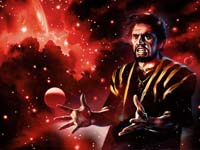 “I have set before you today life and good, death and evil…. Therefore choose life, that both you and your descendants may live.” “Choose for yourselves this day whom you will serve, whether the gods which your fathers served … or the gods of the Amorites, in whose land you dwell. But as for me and my house, we will serve the Lord” (Deuteronomy 30:15, 19; Joshua 24:15). God gave each of His intelligent creatures the gift of free will. That power of choice presupposes the freedom to choose evil. Although God had given everything short of His own position to Lucifer, that angel chose to war against his Creator. Lucifer could just as well have chosen to remain loyal! We have the same choice.

4. Where did Lucifer’s disaffection place God?
It placed God in a dilemma! Since sin was unheard of in the universe, which until then had known only love, no one could understand the danger. If God had promptly exe­cuted Lucifer, heretofore loved and looked up to by all the other angels, the universe would have forever mistrusted Him! Sin would have continued to smolder and erupt indefinitely. On the other hand, if God would let him live, Satan, as he became known as, would spread the problem. Either way, God would be blamed for mishandling the emergency.

5. What did God do?
He needed to “immunize” against sin. This would provide a permanent solution to the sin problem. Being confined and given sufficient time to mature, evil would be exposed for what it really is.

The Saviour said, “I beheld Satan as lightning fall from heaven” (Luke 10:18 KJV). “And there was war in heaven: Michael and His angels fought against the dragon; and the dragon fought and his angels…. And the great dragon was cast out, that old serpent, called the Devil, and Satan, which deceiveth the whole world: he was cast out into the earth, and his angels were cast out with him” (Revelation 12:7-9 KJV). Since Satan had already infected Earth with sin when he lured Adam and Eve to join his rebellion against the authority of their Maker, Satan and his evil angels were confined to this earth! Genesis 3:1-6.

6. What is Satan doing now?
He is “the prince of the power of the air, the spirit that now worketh in the children of disobedience” (Ephesians 2:2 KJV). “Your adversary the devil walks about like a roaring lion, seeking whom he may devour” (1 Peter 5:8). Behind the scenes, he wreaks havoc in countless ways. Meanwhile, since the entrance of sin, God has been and still is actively counteracting and limiting evil while preserving man’s free choice.

7. What were the choices God gave the first human beings?
“And the Lord God commanded the man, saying, ‘Of every tree of the garden you may freely eat; but of the tree of the knowledge of good and evil you shall not eat, for in the day that you eat of it you shall surely die’” (Genesis 2:16-17).

8. When man disobeyed, how far was God willing to go to rescue him? 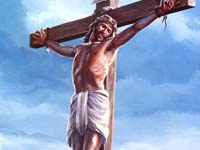 “God so loved the world that He gave His only begotten Son, that whoever believes in Him should not perish but have everlasting life” (John 3:16). When Adam and Eve sinned, they and their descendants became inherently evil. Romans 7:18. Justice called for their execution. But Jesus loved them and voluntarily came to earth as a human being (1 Timothy 3:16; Hebrews 10:5-7) to “taste death for everyone” (Hebrews 2:9). God said, “Deliver him from going down to the Pit; I have found a ransom” (Job 33:24). God provided a wonderful way for all human beings to escape from the trap into which they had fallen.

10. Will evil ever end?
“And God will wipe away every tear from their eyes; there shall be no more death, nor sorrow, nor crying; and there shall be no more pain, for the former things have passed away.” “Affliction will not rise up a second time” (Revelation 21:4; Nahum 1:9). When everyone in the world has received the full revelation of Jesus Christ and made the choice between Christ and Satan, God will eliminate evil forever. The universe will once again be back to normal!

For every person who is perplexed by the entrance of sin, the way out of sin is Jesus! The Redeemer said, “I am the Way, the Truth, and the Life” (John 14:6).

What about … GOD BEING IN CONTROL?

• Is God content only if He is in control of everything and everyone?
God created man with intelligence so He could share some of His sovereignty. “Then [He] blessed them, and God said to them, ‘Be fruitful and multiply; fill the earth and subdue it; have dominion over the fish of the sea, over the birds of the air, and over every living thing that moves on the earth’ ” (Genesis 1:28). However, control is a non-issue with God, because, as Christ said, “Without Me you can do nothing” (John 15:5).

• If I give my heart and life to God, will He run my life without my consent?
No, God never just “takes over” in a person’s life. The choice of whether or not to walk with Him always remains ours. He is a loving Father, whose purpose is to help us all reach our highest potential. This includes letting us experience the consequences of our own decisions. If we push Him away, if we don’t seek His help, or if we decide not to follow Him, He doesn’t impose Himself on us. He simply leaves us to ourselves–in very great danger, of course, for we have no protection from Satan. Therefore, we are urged to accept His great love and plan for our lives. Galatians 6:7; James 1:5; Matthew 7:7-11; Luke 18:1; Hebrews 4:16.

• Does resolving the problem of sin really need to take six thousand years? 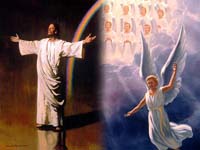 “Do not forget … that with the Lord one day is as a thousand years, and a thousand years as one day. The Lord is not slack concerning His promise … but is longsuffering toward us, not willing that any should perish but that all should come to repentance. But the day of the Lord will come as a thief in the night” (2 Peter 3:8-10). God is perfect. He does no haphazard work. He will settle for nothing less than the full eradication of evil from the universe, and He wants to be sure everyone has a chance to choose life for all eternity. This process may seem long to us but, in comparison with eternity, is very short. And most of us participate in this plan to eradicate sin for sixty to eighty years at most. When the time comes for God to carry out the last steps in His plan, they will be both prompt and final. Then life will really begin.

As we all know, for the really important issues of life, we need “The Right Connections.” Lesson 6 looks at prayer from a variety of angles.