When Jesus lived among us and walked on the earth …

two thousand years ago, He “went about doing good and healing all who were oppressed by the devil, for God was with Him” (Act 10:38). He testified concerning the results of His activity: “The blind see and the lame walk; the lepers are cleansed and the deaf hear; the dead are raised up and the poor have the gospel preached to them” (Matthew 11:5). Representing God’s character (SEE John 14:7-11; 2 Corinthians 4:6) to an extent that the best among humans have but faintly imagined, Jesus demonstrated that God is not only love but life.

At that time it could be said: “The people who sat in darkness have seen a great light, and upon those who sat in the region and shadow of death Light has dawned” (Matthew 4:16). The crowning evidence God gave that Jesus is the promised Messiah was His raising of Lazarus from the dead (John chapter 11). Jesus forever settled the question whether it was God’s grand purpose for man …

2. But let‘s go back even further. What decision was made before the earth was created?
God’s Son “was foreordained before the foundation of the world” to be our Saviour (1 Peter 1:20). (Divinity knew ahead of time that sin would enter the universe and prepared for the emergency.) Before this world was created, the Father and the Son decided upon a plan by which sinful but repentant human beings could obtain life eternal. (See Ephesians 1:2-12.)

3. At what point in time was God’s eternal plan for man’s redemption effective?
Jesus was “slain from the foundation of the world” (Revelation 13:8). Right after our first parents, Adam and Eve, fell into the devil’s trap, God instituted the system of animal sacrifices to help the guilty pair and their descendants keep ever in mind that the Son of God had volunteered to pay the penalty that they deserved (Genesis 3:8, 15; John 3:16).

4. How did God convey the promise of life and hope to Abraham, who was to be a blessing to all nations? Galatians 3:8. 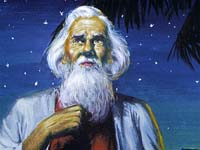 On the way up Mount Moriah, Isaac asked his father, Abraham, where the sacrifice was. Abraham, who had been instructed by God to sacrifice Isaac himself, his sole heir and the beloved son of his old age, answered: “God will provide … Himself the lamb [of sacrifice]” (Genesis 22:8). Abraham did not then realize that God indeed would provide a Lamb in the place of Isaac, because, as precious as Isaac was to Abraham, Isaac could not pay the ultimate price. No one but God Himself could provide a sacrifice of the magnitude required to atone for man’s sin. God wanted Abraham (and all mankind as well) to understand the sacrifice that He was going to make (Genesis 22:9-18).

5. How was the Son of God received on earth when He came to fulfill His promise?
“He came to His own, and His own did not receive Him” (John 1:11). With pain, Jesus addressed the leaders of His people: “But you are not willing to come to Me that you may have life” (John 5:40). Leaders of His own nation crucified God’s Son (Matthew 21:38-39). If you and I had been there, how would we have received Him?

6. Did this incredible betrayal in any way hinder the fulfillment of God’s promise?
“But where sin abounded, grace abounded much more, so that as sin reigned in death, even so grace might reign through righteousness to eternal life through Jesus Christ our Lord” (Romans 5:20-21). “Our Saviour Jesus Christ … has abolished [the second] death and brought life and immortality to light through the gospel” (2 Timothy 1:10). (Regarding the second death, see texts referred to under questions 9 and 12. The godly and the ungodly are equally subject to the first, or natural, death. It was not this death that Jesus delivered us from.) God’s eternal purposes cannot be defeated. Jesus’ death made eternal life available to the whole world!

7. Nevertheless, what consequences followed the rejection of the world’s only Saviour? 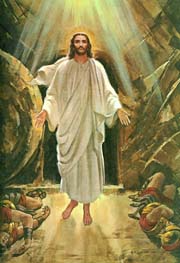 Those who took the life of Jesus Christ haughtily made it clear that they did not want or need any help from Him. God obliged; and many Jews–innocent and guilty alike–were later destroyed by the Romans, while others were scattered throughout the earth. Rejecting divine love leads to ruin and death (Matthew 21:33-46; 23:34-38; Luke 19:41-44). Addressing those who had enjoyed great light and many religious privileges but failed to be transformed accordingly, Jesus said, “It shall be more tolerable for the land of Sodom in the day of judgment than for you” (Matthew 11:24). (The fact that God rejected the nation of Israel as His chosen people does not in the least prevent Him from accepting and showing grace to individuals of Jewish descent. Quite the contrary. See Acts 10:35; Romans chapters 9-11; Galatians 3:28-29.) We too will be left to our own devices if we reject the Saviour.

8. What will happen to those who decline God’s urgent invitation to accept His love?
“For God so loved the world that He gave His only begotten Son, that whoever believes in Him should not perish but have everlasting life” (John 3:16). To perish means to die and remain dead forever. The leaders of the Jews refused to believe Jesus. Such unbelief prevents repentance and leads to eternal death. “They shall be as though they had never been” (Obadiah 16). “For yet a little while and the wicked shall be no more” (Psalm 37:10).

9. But doesn’t the inspired word say that the ungodly will suffer endlessly in the fires of hell?
In Lesson 11, we considered three Bible verses, Matthew 25:46 and Revelation 14:10-11. They describe the “everlasting punishment” of the wicked, the second death. This death, not the punishing itself, will last forever (Revelation 20:6, 14; 21:8; John 3:36).

10. What will happen to Satan and his followers in the lake of fire?
“‘For behold, the day is coming, burning like an oven, and all the proud, yes, all who do wickedly will be stubble. And the day which is coming shall burn them up,’ says the Lord of hosts, ‘that will leave them neither root nor branch. [And in that day the wicked] shall be ashes” (Malachi 4:1, 3). (God’s fire will also devour–annihilate–Satan, the originator of sin, turning him into “ashes.” In Ezekiel 28:14-18, Satan is figuratively addressed as “the king of Tyre.”) Then God will recreate the world (Revelation 21:1). (God will rid the earth of its wicked inhabitants and cleanse it by fire. The planet itself, however, will remain–Isaiah 24:1, 3; Jeremiah 4:27–for it is the heritage of the children of God–Psalm 25:12-13. Question 1 also brings this out.)

11. But doesn’t God’s word say that the fires of hell will be “unquenchable”?
“Sodom and Gomorrah … having given themselves over to sexual immorality and gone after strange flesh, are set forth as an example, suffering the vengeance of eternal fire” (Jude 7). “Eternal fire” burned up those cities (Genesis 19:24-25, 27-29), but the fire itself burned out. There is nothing left but ashes. So the lake of fire “will burn up the chaff with unquenchable fire” (Matthew 3:12). And this fire will not be quenched but will end when its fuel is consumed.

12. Will the penalty of the wicked involve physical pain?
“[The Son of Man] will cast them into the furnace of fire. There will be wailing and gnashing of teeth” (Matthew 13:42). Yes, it is painful to die. But the Bible implies that the punishment will not be the same for everyone (Revelation 20:12-13), and no one, not even Satan, will suffer endlessly. The wicked will be relieved by the second death. (But today, through Jesus, it is our privilege to be relieved of the threat of eternal death. See 2 Corinthians 1:10.)

13. What earnest appeal does God make today, not only to Israel, but to every person on earth?
“I have no pleasure in the death of the wicked, but that the wicked turn from his way and live. Turn, turn from your evil ways! For why should you die?” (Ezekiel 33:11).

14. In what mental state will the ungodly finally perish? What is the ultimate question for us?
On the cross, Jesus suffered physically, but much more mentally. His humanity knew, based on prophecy and faith in His Father, that He would be resurrected on the third day. However, practically He did not have that assurance. He knew He was dying for the sins of the world and feared it would be forever. Those who refuse salvation, after realizing that they actually forfeited eternal life, will suffer the mental agony of knowing that their death will be forever!

“To be, or not to be,” represents everyone’s choice. Today Jesus freely offers salvation and life eternal to all. It is for us to choose to live eternally–or to die forever! Won’t you choose life?

What about … GOD’S OFFER OF LOVE AND LIFE VERSUS THE MYSTERY OF DEATH?

Why do people get old and die? Where does God’s offer of love and life fit in?

Some rental trucks have governors installed to prevent high-speed driving. This is for the good of both drivers and truck companies. Just as drivers may dislike such limits, humanity has always sought to escape death, searching for the “fountain of youth.” 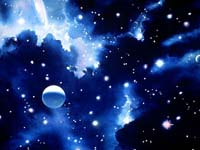 Scientists say that human cells are actually made to live forever. But science also reports that somehow some sort of “governor” limits our lifespan. After the fall of man, God did two things: 1) He extended probation, and 2) He put a limit to our physical existence so we won’t live forever with sinful, fallen natures (Genesis 3:22-24). Why? Because sin is painful for everyone. God has something much better in mind for mankind! (Revelation 21:4 says: “God will wipe away every tear from their eyes; there shall be no more death, nor sorrow, nor crying. There shall be no more pain, for the former things have passed away.”

“God has given us eternal life, and this life is in His Son. He who has the Son has life…. Believe in the name of the Son of God, that you may know that you have eternal life” (1 John 5:11-13). God has already given us eternal life! Unless we seek for it by faith in His Son Jesus Christ, the gift will elude us. So, don’t weary yourself searching for the fountain of youth. Instead, seek God, who freely offers you eternal life! Drop the suspicion that God does not care for you. Establish a relationship with Him, for knowing Him and His Son, Jesus Christ, means life eternal (John 17:3).