Not in the Bible alone but also in the Testimonies it is repeatedly mentioned that the history of modern Israel, or God’s people at the present time, is compared to that of ancient Israel.

“Satan’s snares are laid for us as verily as they were for the children of Israel just prior to their entrance into the land of Canaan. We are repeating the history of that people. . . .

“The church has turned back from following Christ her Leader and is steadily retreating toward Egypt. . . .
“You are following the same path as did ancient Israel. There is the same falling away from your holy calling as God’s peculiar people.” – Testimonies, vol. 5, pp. 160, 217, 75, 76 (emphasis ours).

If this is so, it is obviously important to draw spiritual and historical parallels between ancient Israel and the modern church of today. In Revelation 15:3, we read that the overcomers, standing as victors on the sea of glass, sing about this dual experience. It is called “the song of Moses the servant of God, and the song of the Lamb.”

We know form Revelation 12:11 that “they overcame him (Satan) by the blood of the Lamb.” It is obvious that Christ’s blood was shed for their redemption. During the investigative judgment in heaven, they had the blood on the doorposts of their hearts for a sign. But what about the song of Moses? Where does this come in?

Since we are all acquainted with the history of the Advent people as well as with the experiences made during the wilderness journey under Moses, let us draw your attention to just a few of the astoundingly parallel events: 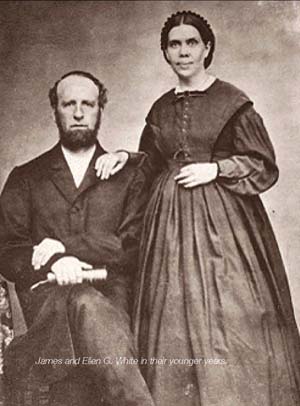 Today, in the same line of succession, we have the Testimonies of the Spirit of prophecy. We should study them day and night and do all that the servant of God has left for us as a precious heritage.

We bring these facts to your attention to establish your faith in the Divine Gift of prophecy. Listen to these words:
“Perilous times are before us. Everyone who has a knowledge of the truth should awake and place himself, body, soul, and spirit, under the discipline of God. The enemy is on our track. We must be wide awake, on our guard against him. We must put on the whole armor of God. We must follow the directions given through the spirit of prophecy.” – Testimonies, vol. 8, p. 298 (emphasis ours).

The principles that were handed down to us by the pioneers of the Advent movement constitute the old landmarks of truth. The following testimonies speak about these landmarks:

“There is to be no change in the general features of our work. It is to stand as clear and distinct as prophecy has made it. We are to enter into no confederacy with the world, supposing that by so doing we could accomplish more. . . . No line of truth that has made the Seventh-day Adventist people what they are is to be weakened. We have the old landmarks of truth, experience, and duty, and we are to stand firmly in defense of our principles, in full view of the world.” – Testimonies, vol. 6, p. 17.

“Our only safety is in preserving the ancient landmarks. ‘To the law and to the testimony: if they speak not according to this word, it is because there is no light in them.'” – Testimonies, vol. 5, p. 199.

“Never, never seek to remove one landmark that the Lord has given His people. The truth stands

firmly established on the eternal Rock – a foundation that storm and tempest can never move.” – Testimonies, vol. 8, p. 162.

“He (Satan) works today as he worked in heaven, to divide the people of God in the very last stage of this earth’s history. He seeks to create dissension, and to arouse contention and discussion, and to remove if possible the old landmarks of truth committed to God’s people. He tries to make it appear as if the Lord contradicts Himself.” – Evangelism, pp. 359, 360 (1906).

“As a people we are to stand firm on the platform of eternal truth that has withstood test and trial. We are to hold to the sure pillars of our faith. The principles of truth that God has revealed to us are our only true foundation. They have made us what we are. The lapse of time has not lessened their value.” – Special Testimonies, Series B, No. 2, p. 51 (1904).
Such is the rich and wonderful heritage of faith handed down to us under the careful guidance of God’s Spirit. Let us treasure this heritage and defend it against all attacks from the inside or the outside.

“God’s remnant people, standing before the world as reformers, are to show that the law of God is the foundation of all enduring reform, and that the Sabbath of the fourth commandment is to stand as a memorial of creation, a constant reminder of the power of God. In clear, distinct lines they are to present the necessity of obedience to all the precepts of the Decalogue. Constrained by the love of Christ, they are to cooperate with Him in building up the waste places. They are to be the repairers of the breach, restorers of paths to dwell in.” – Prophets and Kings, p. 678.