In the previous lesson we dealt with the shaking to take place among God’s people. Since the chapter in Early Writings, “The Shaking,” is in the plain view of all laymembers and workers alike, the favorite view expressed by Seventh-day Adventists is that the shaking will occur during the crisis over the passing of the Sunday law. This calms many minds and stops them from further search. But we challenge this view. Show us in the whole chapter just one slight intimation that the shaking will come during the enforcement of the Sunday law. It’s just not there! Instead, it states plainly that the shaking will come because of the Laodicean message. And since the latter rain will run parallel to the Sunday decree, all preparations for it must be made now.

It was in 1913 that Sister White wrote “Words of Greeting” to those assembled at the General Conference. Apparently it was her final solemn appeal for a much needed reformation before her passing. But something is very significant, dear student: She linked this coming reformation to a certain “crisis” to come right then. She said:

“God calls upon those who are willing to be controlled by the Holy Spirit to lead out in a work of thorough reformation. I see a crisis before us, and the Lord calls for His laborers to come into line.” – Testimonies to Ministers, p. 514.
She obviously saw a crisis looming up right at that time in 1913. As early as 1909 she spoke about it:
“The time is nearing when the great crisis in the history of the world will have come, . . .” – Testimonies, vol. 9, p. 97. 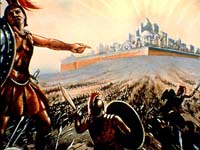 Speaking of this coming crisis, she also linked other events with it:
“Soon God’s people will be tested by fiery trials, and the great proportion of those who now appear to be genuine and true will prove to be base metal.” – Testimonies, vol. 5, p. 136.

“Fearful tests and trials await the people of God. The spirit of war is stirring the nations from one end of the earth to the other.” – Testimonies, vol. 9, p. 17.

“We are standing on the threshold of the crisis of the ages. In quick succession the judgments of God will follow one another – fire, and flood, and earthquake, with war and bloodshed.” – Prophets and Kings, p. 278.

“I was shown the inhabitants of the earth in the utmost confusion. War, bloodshed, privation, want, famine, and pestilence were abroad in the land.” – Testimonies, vol. 1, p. 268.

With these words the servant of the Lord introduced the World Wars and following strife described in Matthew 24:7: “For nation shall rise against nation, and kingdom against kingdom:. . .”

A LITTLE TIME OF PEACE

After Sister White saw war and bloodshed “abroad in the land” and “the inhabitants of the earth in the utmost confusion, ” she continued:

“My attention was then called from the scene. There seemed to be a little time of peace.” – Testimonies, vol. 1, p. 268.
It is rather remarkable that following the first worldwide engagement, which history called for the first time “World War I” (1914-1918), there was a short time of peace after the hostilities ceased. For about 20 years the nations hoped to achieve unity and peace through the League of Nations. But God’s seeress predicted another war to follow.

“Once more the inhabitants of the earth were presented before me; and again everything was in the utmost confusion. Strife, war, and bloodshed, with famine and pestilence, raged everywhere. Other nations were engaged in this war and confusion. War caused famine. Want and bloodshed caused pestilence. And then men’s hearts failed them for fear, ‘and for looking after those things which are coming on the earth.'” – Testimonies, vol. 1, p. 268.

That this statement is indeed applicable to the conflicts that followed the American Civil War is evident from the lines just preceding it:

“Other nations are intently watching this nation, for what purpose I was not informed, and are making great preparations for some event.” – Testimonies, vol. 1, p. 268.

Then the statement follows referring to the inhabitants of earth, not America alone. How clearly World War II is outlined here! Is not a true prophet known when his predictions come to pass? Yes, it came precisely as foretold – World War I came 52 years, and World War II 77 years, after the predictions were made.

In 1890 the Spirit of prophecy gave an even more detailed description of the two World Wars to come:
“The tempest is coming and we must get ready for its fury, having repentance toward God and faith toward our Lord Jesus Christ. The Lord will arise to shake terribly the earth. We shall see troubles on all sides. Thousands of ships will be hurled into the depths of the sea. Navies will go down, and human lives will be sacrificed by millions. . . . The end is near, probation is closing.” – Signs of the Times, April 21, 1890.

Please refer back to Lesson 4, where several statements are given in regard to the wars to come. At the same time, we were told, there would come a thorough reformation among God’s people. Keep this important fact in mind.

We are also informed concerning the nature of the “tests and trials” and what they would involve:
“There is a prospect before us of a continued struggle, at the risk of imprisonment, lost of property, and even of life itself, to defend the law of God, which is made void by the laws of men.” – Testimonies, vol. 5, p. 712.

If the last great, final test during the Sunday law is to be a life-and-death struggle over obedience to God’s or man’s laws, we conclude that the many tests preceding it would also involve our faithfulness to God’s law. Remember this, and it will help you understand the developments presented in the next lessons. Today, ask the Lord for an obedient heart so you can endure every test and trial now and thus be prepared to prove faithful in the final test.